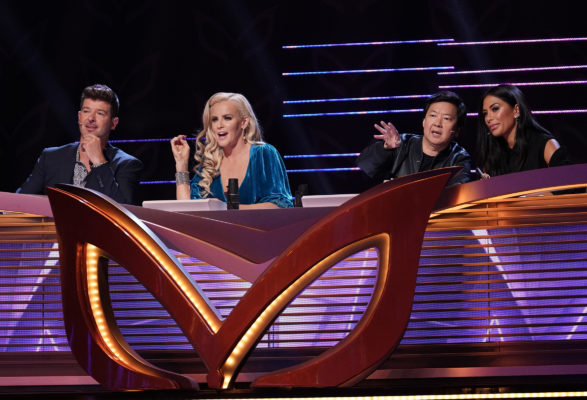 Is the first season of The Masked Singer TV show on FOX music to your ears? As we all know, the Nielsen ratings typically play a big role in determining whether a TV show like The Masked Singer is cancelled or renewed for season two. Unfortunately, most of us do not live in Nielsen households. Because many viewers feel frustration when their viewing habits and opinions aren’t considered, we’d like to offer you the chance to rate all of The Masked Singer season one episodes here.

A FOX game show based on a South Korean program, The Masked Singer features competing, singing celebrities. Nick Cannon hosts, with Jenny McCarthy, Nicole Scherzinger, Ken Jeong, and Robin Thicke serving as panelists. Celebrities go head to head in a singing competition, with a major twist: each performer is completely disguised in a fantastical costume, in order to conceal his or her identity. Each week, after the elimination, the departing singer reveals just who was making music behind the mask.

What do you think? Which season one episodes of The Masked Singer TV series do you rate as wonderful, terrible, or somewhere between? Should FOX cancel or renew The Masked Singer for a second season? Don’t forget to vote, and share your thoughts, below.

1/30/19 update: FOX has renewed The Masked Singer for a second season.

Even famous people have hidden talents and this show proves it. I love the costumes and Nick Cannon and the guest judges are really good. More clues are needed for the audience and voting should be open to callers. I hope the show is renewed for it has a different spin to it. Good start.

I think the monster is Bobby Brown

The monster is t pain without doubt

I think the monster is Michael Vick

I think the monster may be Mike Tyson

The rabbit is Tatum Chaning

I think the alien is Lauren henson.

I like this show it just the right speed do if you only lissin to clues you can guess it. But if you look into it you can probably find out who they are if that more your style. I like to just listen and see if I can get it.

I think Jessie J is the Lion. She was in a girl group called Soul Deep.

I think The Alien = LaToya Jackson, The Bee = Gladys Knight,

I just wanted to say that I am now two for two on guessing the Masked Singer. I love this show! I wish they would have some kind of prize to be split for all viewers who guess right. I can’t believe I guessed Antonio Brown and it was right! I guessed Tommy Chong because he was too tall to be Cheech Marin.

Peacock: An Osmond or Jackson
Hippo: Mayweather or another boxer