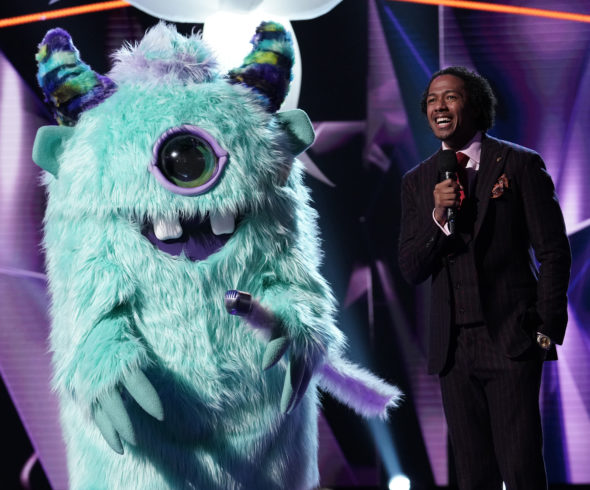 Does FOX plan to drop the mask? Has The Masked Singer TV show been cancelled or renewed for a second season on FOX? The television vulture is watching for the latest cancellation and renewal news, so this page is the place to track the status of The Masked Singer, season two. Bookmark it, or subscribe for the latest updates. Remember, the television vulture is watching your shows. Are you?

A FOX game show based on a South Korean program, The Masked Singer features competing, singing celebrities. Nick Cannon hosts, with Jenny McCarthy, Nicole Scherzinger, Ken Jeong, and Robin Thicke serving as panelists. Celebrities go head to head in a singing competition, with a major twist: each performer is completely disguised in a fantastical costume, in order to conceal his or her identity. Each week, after the elimination, the departing singer reveals just who was making music behind the mask.

Will FOX cancel or renew The Masked Singer for season two? The series has been doing very well so, unless the ratings completely collapse, I think it’s a sure bet that a second season renewal is coming. I’ll keep an eye on the Nielsens and keep this page up-to-date. Subscribe for free The Masked Singer cancellation and renewal alerts.

1/30/19 update: FOX has renewed The Masked Singer for a second season.

What do you think? Are you glad that The Masked Singer TV show has been renewed for season two? How would you feel if FOX had cancelled this TV series, instead?

We Love love the mask singer. got my mom hooked on it she doesn’t watch shows like that but she loves it. hope to see more of the show …..keep it coming….

The masked singer is the best show on!!! Need to make more and show more often!!! Love love love the show and I’m not a big tv watcher!!

Clearly renew it a great show. Where the average viwers can’t guess who it is.