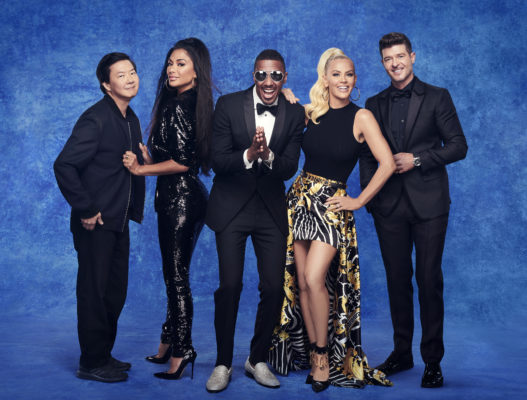 Will this series continue to hit the right notes? Has The Masked Singer TV show been cancelled or renewed for a fourth season on FOX? The television vulture is watching all the latest cancellation and renewal news, so this page is the place to track the status of The Masked Singer, season four. Bookmark it, or subscribe for the latest updates. Remember, the television vulture is watching your shows. Are you?

Airing on the FOX television network, The Masked Singer is hosted by Nick Cannon and features panelists Jenny McCarthy, Nicole Scherzinger, Ken Jeong, and Robin Thicke. The show features celebrities facing off against one another with one major twist — each singer is covered from head to toe in an elaborate costume, complete with a full face mask to conceal his or her identity. With each performance, the host, panelists, audience, viewers and even the other contestants are left guessing who is singing behind the mask. The costumed characters in season three include Astronaut, Banana, Bear, Elephant, Frog, Kangaroo, Kitty, Llama, Miss Monster, Mouse, Night Angel, Rhino, Robot, Swan, Taco, T-Rex, Turtle, and White Tiger.

The third season of The Masked Singer averages a 2.40 rating in the 18-49 demographic and 8.64 million viewers. Compared to season two, that’s up by 19% in the demo and up by 23% in viewership. Find out how The Masked Singer stacks up against other FOX TV shows.

Will FOX cancel or renew The Masked Singer for season four? The show has been one of the top-rated shows of the season. I’m sure it will be renewed and FOX will likely air two cycles during the 2020-21 season. I’ll update this page with breaking developments. Subscribe for free alerts on The Masked Singer cancellation or renewal news.

5/6/20 update: The Masked Singer has been renewed for a fourth season.

What do you think? Are you glad that The Masked Singer TV show has been renewed for a fourth season? Did you think it was possible that FOX would cancel this TV series, instead?

I like the show! Even though, sort of ridiculous and crazy; it is so entertaining! The judges are all funny and hilareous; and I like the way they and the audience really gets into it! I just wish they would also do a version for regular people to participate; and that you do not have to be a big time celebrity already! It would give others/regular people, who may be a little shy or may be too nervous to perform on similar shows to maybe have more confidence to sing in public with a desquise on! Julia T.

The premise is great. The judges need to be replaced. One is more obnoxious than the other. I won’t watch because of the judges. Replace them and I’ll be happy to watch again.

Me too I love it…

We love the show. Been watching it since it first came on and it is something that my son can watch with me. So, please please please renew the show for at least 3 more seasons

I find it too stupid to watch.