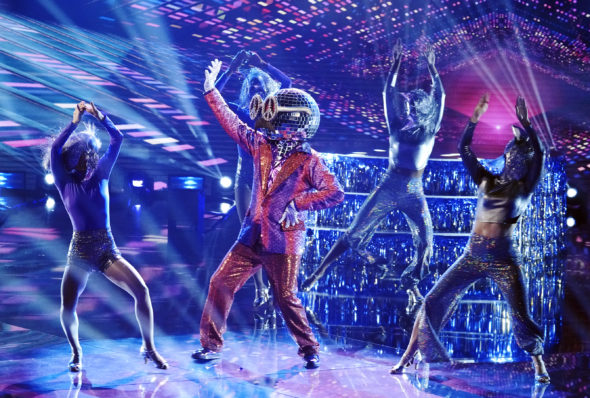 “Everybody dance now!” Has The Masked Dancer TV show been cancelled or renewed for a second season on FOX? The television vulture is watching all the latest cancellation and renewal news, so this page is the place to track the status of The Masked Dancer, season two. Bookmark it, or subscribe for the latest updates. Remember, the television vulture is watching your shows. Are you?

Airing on the FOX television network, The Masked Dancer is hosted by Craig Robinson and features Ken Jeong, Paula Abdul, Brian Austin Green, and Ashley Tisdale as panelists. The show features celebrity contestants shaking their tail feathers, while covered from head-to-toe in elaborate costumes and face masks, leaving audiences to guess their identities. Costumed celebrities are joined on stage by masked partners and back-up dancers, as they perform a series of dances together. The styles span from hip-hop to salsa, jazz to tap dancing and more. Each episode, a series of clues will be sprinkled throughout packages, costumes, and routines, leading the panelists one step closer to figuring out which famous faces are freestyling behind the masks.

Will FOX cancel or renew The Masked Dancer for season two? While this series may not be as popular as The Masked Singer, it’s doing well enough to land a renewal. I’ll update this page with breaking developments. Subscribe for free alerts on The Masked Dancer cancellation or renewal news.

What do you think? Do you hope The Masked Dancer TV show will be renewed for a second season? How would you feel if FOX cancelled this TV series, instead?

I think it should try going to buy itself out. I think it should sale the show in an buy out deal. Meaning 10% an month for 10,000 an month until it sold 95% and keep 5% for 95,000 in 9 and a half months. You know an network would buy to try to complete against the masked singer. But people are more invested in the masked singer so it won’t happen. But this way they wouldn’t be out much since it basically just an way to draw in viwers for the masked singer anyway. But do an 2nd season… Read more »

I think it’s good. Now I know it more like an ad for the masked singer but it’s pretty good.

I really loved The Masked Dancer because the clues are almost like The Masked Singer and I thought Paula Abdul was something else figuring out those clues than Brian, Ken and Ashley did! I was so happy for Gabby Douglas getting to the end being the Cotton Candy and she really deserved to be the first winner after surviving that over 10ft high fall before she did fantastic dancing on the show. Craig Robinson was OK being a host after I watched him voicing Cookie the Ogre in Shrek Forever After when I was a kid! So I hope it… Read more »

This doesn’t interest me in the least!