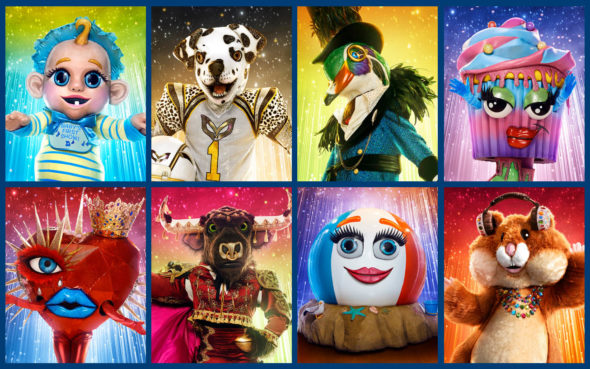 Will this competition series continue to be a winner for FOX? Has The Masked Singer TV show been cancelled or renewed for a seventh season? The television vulture is watching all the latest cancellation and renewal news, so this page is the place to track the status of The Masked Singer, season seven. Bookmark it, or subscribe for the latest updates. Remember, the television vulture is watching your shows. Are you?

Airing on the FOX television network, The Masked Singer is hosted by Nick Cannon and features panelists Jenny McCarthy, Nicole Scherzinger, Ken Jeong, and Robin Thicke. The show features singing celebrities facing off against one another with one major twist — each contestant is covered from head to toe in an elaborate costume, complete with a full face mask to conceal their identity. With each performance, the host, panelists, audience, viewers — and even the other contestants — are left guessing who is singing behind the mask. The costumed characters in season six include Baby (WC), Banana Split, Beach Ball, Bull, Caterpillar, Cupcake, Dalmatian, Hamster, Jester, Mallard, Mother Nature, Octopus, Pepper, Queen of Hearts, and Skunk.

The sixth season of The Masked Singer averaged a 0.86 rating in the 18-49 demographic and 4.16 million viewers in the live+same day ratings (includes all DVR playback through 3:00 AM). Compared to season four (which aired in Fall 2020), that’s down by 50% in the demo and down by 37% in viewership. While these numbers don’t include further delayed or streaming viewing, they are a very good indicator of how a show is performing, especially when compared to others on the same channel. Other economic factors can be involved in a show’s fate, but the higher-rated series are usually renewed and the lower-rated ones are cancelled. Find out how The Masked Singer stacks up against other FOX TV shows.

Will FOX cancel or renew The Masked Singer for season seven? Though the ratings have dropped, this show has remained FOX’s highest-rated show. I’m sure it will be renewed but, at some point, I suspect the network will begin airing only one cycle of Masked Singer a year. I’ll update this page with breaking developments. Subscribe for free alerts on The Masked Singer cancellation or renewal news.

1/27/22 update: The Masked Singer has been renewed for a seventh season.

What do you think? Are you glad that The Masked Singer TV show has been renewed for a seventh season? How would you feel if FOX had cancelled this TV series, instead?

I would be heartbroken if masked singer wasn’t renewed. I didn’t even consider a possibility that it wouldn’t! Please please please. I can’t wait for season 7!

Look forward to masked singer and disappointed when it is teplaced

Hope it gets renewed only show I watch on fox

I love the show an my kids love it. Really hope it gets renewed

Hope it gets renewed!!

Love this show so sad