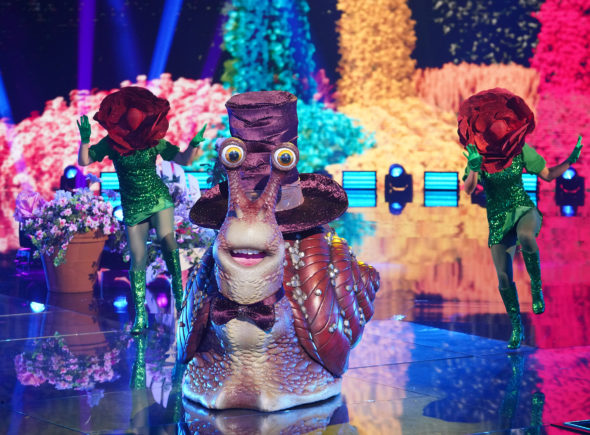 We’re not done with masks yet. FOX has renewed The Masked Singer TV series for a sixth season which will air in Fall 2021. The fifth season finale airs on May 26th.

Airing on the FOX television network, The Masked Singer is hosted by Nick Cannon and features panelists Jenny McCarthy, Nicole Scherzinger, Ken Jeong, and Robin Thicke. Niecy Nash serves as a guest host in some fifth season episodes. The show features singing celebrities facing off against one another with one major twist — each contestant is covered from head to toe in an elaborate costume, complete with a full face mask to conceal his or her identity. With each performance, the host, panelists, audience, viewers — and even the other contestants — are left guessing who is singing behind the mask. The costumed characters in season five include Black Swan, Chameleon, Grandpa Monster, Phoenix, Piglet, Porcupine, Raccoon, Russian Dolls, Seashell, and Snail.

What do you think? Do you enjoy The Masked Singer TV series on FOX? Are you looking forward to watching season six?

I love the Masked Singer for the costumes and love guessing who it is. I had hoped to see more prominent singers since many wouldn’t be working because of COVID. I would like to see the Piglet win this season. Glad it has been renewed!

I like guessing who the masked singers are, but this year all the masked singers have just been has-beens from the 1990’s (aside from Wiz Khalifa) and the show itself wastes so much time with just the panelists yammering on about nothing and the fake audience is annoying. I hope next season is better.

I’m so happy masked singer got renewed! First, DWTS got renewed than American idol now this! (all shows I watch and love) I can’t wait to see new people on this show! And before I go i have to say I hope black swan wins this season (season 5) and by the way who I think is jojo.(not siwa) Anyway I’m just super excited!!! See ya.