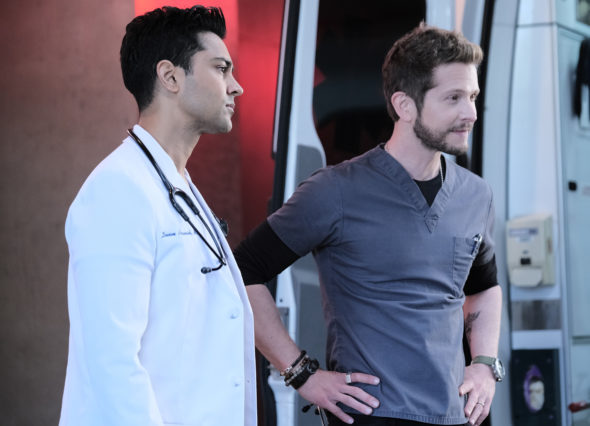 The staff at Chastain Memorial Hospital will continue to help people in need. FOX has renewed The Resident TV series for a fifth season. It will remain in its Tuesday night timeslot and will be followed by new drama series Our Kind of People.

Airing on Tuesday nights, the fourth season of The Resident averages a 0.56 rating in the 18-49 demographic and 3.55 million viewers in the live+same day ratings. Compared to season three, that’s down by 23% in the demo and down by 12% in viewership. It’s a middle-of-the-pack performer for FOX in the demo but ranks third in viewers.

What do you think? Are you a regular viewer of The Resident TV series on FOX? Are you planning to watch season five during the 2021-22 television season?

So happy The Resident is returning. Love the show, cast and stories. Yeah !!!

So glad! Love me some Conrad LOL

So thrilled The Resident has been renewed. I truly look forward to watching it every Tuesday. It has lots of character and you can’t predict what’s going happen. I’ll keep watching it so keep renewing it.

I’m so happy this show will be renewed I’ve watched these actors on Gilmore girls. Revenge for the actress who plays Nick. Love all of the players

I still say The Resident is the nest medical show on TV.

This is one of my favorite shows. I am thrilled it has been renewed.

I love the resident best show on fox

Yes outstanding truly enjoy the show characters writers. Fox is doing something right with their programming unlike the other Networks. Well accept their comical so called not news.

So happy the Resident has been renewed. To the writers of the show, please give Conrad a new arc, a cause… please don’t turn him into Mr. Mom.

Good to know this is coming back. Still pissed off about Prodigal Son though.

Best news (for me) so far of the upfront season. I was beginning to think I wouldn’t have anything left to watch on any network.