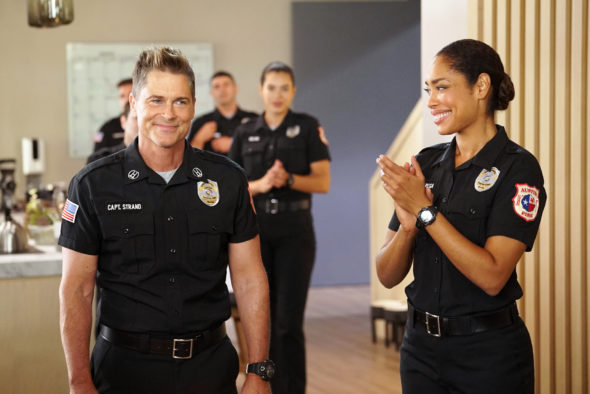 Owen and his crew will be back to try to save the day in the 2021-22 television season. FOX has renewed the 9-1-1: Lone Star TV series for a third season which will debut mid-season.  The network has also renewed 9-1-1 for a fifth season but that series will return sooner, as part of the Fall 2021-22 season.

The second season of 9-1-1: Lone Star averages a 0.87 rating in the 18-49 demographic and 5.50 million viewers in the live+same day ratings. Compared to season one, that’s down by 28% in the demo and down by 13% in viewership. It’s currently the network’s second-highest-rated scripted series in both categories, behind 9-1-1.

What do you think? Are you glad that the 9-1-1: Lone Star TV show has been renewed for a third year? Are you looking forward to the return of this FOX series during the 2021-22 television season?

Love this show! BRING IT BACK SOON REALLY MISS IT

911 Lone Star is the one I watch. It has drama, humor, believable characters, and a wonderfully “mixed” bunch of actors—-black, white, Latinix, gay, straight. I have really enjoyed seeing that.

Sorry, love 911. But, Lone Star? C’mon, it’s great for a really fake show, you couldn’t recruit all the special intrest/minority groups portrayed in the house. I lived in Boston for 17yrs from 1975 and have to gay brother’s in laws, one who died off AIDS. I had no problem except with the flaming gays who have to announce to the world their gay. My wife is bi. We don’t have the desire to throw it in everyone’s face. Same with w/mixed couples on every commercial you see. Their are only just over a million mixed marriages in the U.S.… Read more »

SO HAPPY! Both the 911 shows are renewed!

Very glad to see it coming back another season, hopefully many seasons.

I’m glad it’s been renewed! I really enjoy watching it.

Sorry for me watched first EPs didn’t care for it but glad others are enjoying it. I do watch the original 911 one of the top 10 remains shows on after the other Networks canceling everything

I really like this show and am glad that it’s been renewed!

Renewing this show was an obvious waste you your money!!!!!!! I won’t be watching it.

Bye, you don’t know what you’ll be missing ‍♀️‍♂️‍♀️‍♂️‍♀️