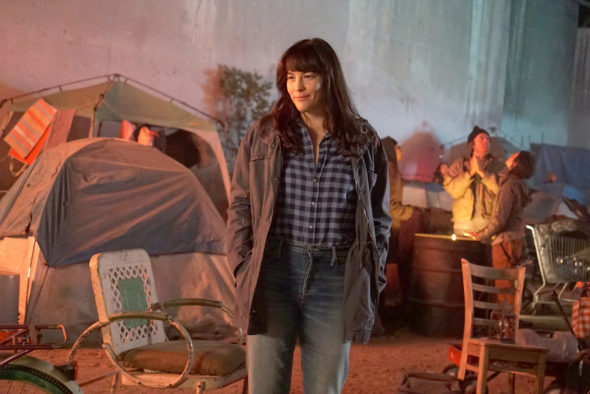 9-1-1: Lone Star is gearing up to start production on its second season, but one member of the cast isn’t returning to film the new episodes. Actress Liv Tyler has departed the series due to her not being able to travel back and forth between her home in London and the set in Los Angeles during the pandemic. During the first season of the FOX series, Tyler made the transatlantic trip several times to film episodes.

Tim Minear, the co-creator of the series, said the following about Tyler’s departure from the FOX show, per Deadline:

“What a thrill it was having a movie star of Liv Tyler’s stature to help us launch the first season of 9-1-1: Lone Star. We loved working with Liv and will be forever indebted to her for her haunting, powerful portrayal of Michelle Blake. While we were able to tell a complete chapter in Michelle’s story, as with Connie Britton on our mothership, we also feel like there are more stories to be told. The door here will always be open for a return.”

Rob Lowe, Jim Parrack, Ronen Rubenstein, Sierra McClain, Natacha Karam, Brian Michael Smith, Julian Works, and Rafael Silva star in the firefighter drama series. It was reported earlier this month that Gina Torres, best known for her role on Suits, had joined the series. Her character will help fill some of the void left by Tyler’s departure.

The FOX drama will return with season two in early 2021. A premiere date has not yet been set.

What do you think? Are you surprised Tyler is leaving 911: Lone Star? Will you watch season two of the FOX series?

She did nothing for the show. I am glad she will not be in season two.

I won’t miss Liv Tyler – that little girl whisper of hers was very off putting.

It is too bad Liv won’t be on season 2 but can see how the logistics of traveling between continents like that would be a nightmare! Hopefully, down the road, she will be able to return to the show.

DITTO I WON’T MISS HER AT ALL

I will miss Tyler. Pretty lame. Rob Lowe can do better than that.

I must agree with Patti Ramey that I also sorry that Liv Tyler won’t return to the show. I still watch the second season because I truly love the show.

Very, very sad to see Liv Tyler go!! All actors worked so well together to make to make a GREAT show!! Hopefully with her leaving, it doesn’t change the cohesiveness of of the show, and thus, ruin the show!!

No loss there. Gina will be better.

This makes me sad – I really liked her and her character on the show. And I LOVED her singing!! I hope once everything returns back to normal, she’ll come back to the show

Am so sad to see zLiv Tyler go. Her scences with Rob Lowe were HOT!