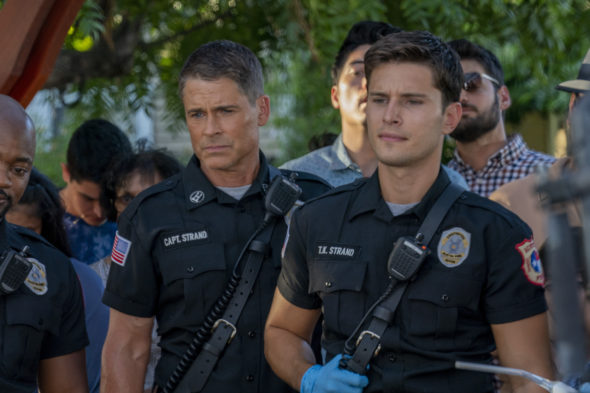 It was only a matter of time. The 9-1-1 TV show has been very successful for FOX so, the network has launched a new series called 9-1-1: Lone Star. Will this show perform as well or better in the ratings? Will 9-1-1: Lone Star be cancelled or renewed for season two? Stay tuned. *Status Update Below.

3/10 update: You can see the latest night’s ratings in context.

What do you think? Do you like the 9-1-1: Lone Star TV series on FOX? Should it be cancelled or renewed for a second season?

This show is laughable at best. They have NEVER been to Texas, or Austin. It is so unrealistic with its story lines and location scenes. The medical treatment given by so called EMTs is so badly portrayed, that I, an untrained citizen, can see how bad it is! I love the original series 9-1-1, but this one is so bad, I can’t even watch anymore. Please put the show out of my misery! Sorry, Rob Lowe. I still love you! ❤ Try again.

Love it we watch every week can’t wait till it’s back on!

This has been my favorite show recently. I was sad it was such a short season. I hope they make more episodes. The cast is great and there is easily lots of story line left to play out!

It should be cancelled, it’s a joke and it tries to hard to please every segment population in America.

It’s really a great show. We need more tv shows like this. That teaches us to help and care for others instead of teaching us how to kill them.