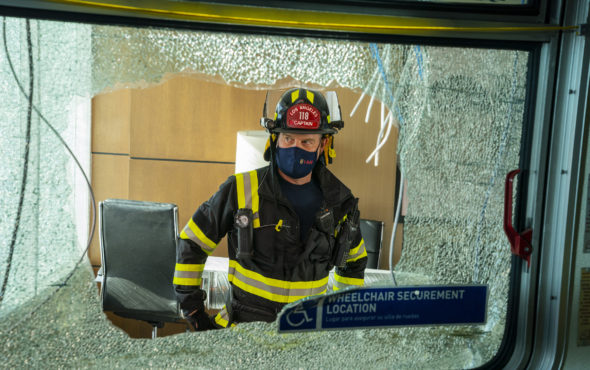 As bad as things may get in the real world, they’ll always be worse on FOX’s 9-1-1 TV series. The network has renewed the first responder series for a fifth season which will launch in the fall portion of the 2021-22 season. Sister series 9-1-1: Lone Star was also renewed today but that program’s upcoming third season will launch in mid-season.

The 9-1-1 show stars Angela Bassett, Peter Krause, Jennifer Love Hewitt, Oliver Stark, Kenneth Choi, Aisha Hinds, Ryan Guzman, Rockmond Dunbar, Corinne Massiah, Marcanthonee Jon Reis, Gavin McHugh, and Jon Harlan Kim. A scripted drama that’s been inspired by real-life experiences, this show centers on the police officers, firefighters, and paramedics who risk their lives to save others in Los Angeles. The fourth season begins with Los Angeles’ finest and fearless first responders helping citizens after a devastating 8.0 earthquake and coastal tsunami wreak havoc in the city. Meanwhile, Athena (Bassett) is determined to put her physical and emotional injuries behind her, Maddie (Hewitt) and Chimney (Choi) prepare for the birth of their baby, Hen (Hinds) begins medical school, and Buck (Stark) delves into his past to help deal with his present.

Airing Monday nights, the fourth season of 9-1-1 averages a 1.06 rating in the 18-49 demographic and 6.54 million viewers in the live+same day ratings. Compared to season three, that’s down by 23% in the demo and down by 5% in viewership. It has remained FOX’s highest-rated scripted series in both categories.

Here’s the announcement from FOX:

What do you think? Do you enjoy the 9-1-1 TV show on FOX? Are you looking forward to watching season five?

I love that show. Looking forward to it. I love Buck as well. A great character. Please keep it going

So glad to hear that 911 season five has been renewed. Love this show ,you learn things from each episode. Great Cast.

SO HAPPY! Both 911 shows are renewed!

I am so in love with this show. All the characters are great and portrayed by awesome actors/actresses. I would really enjoy watching another season.

Odd that next season is starting out with exactly the same events as an earlier season– birth of baby, tsunami. Check you info! That said, the show is terrific!

I’m so happy there will be another season. Excellant writing, acting, action .

How could they not it is a top show with great characters writers story telling. Unlike the other networs canceling everything the watchers want to see.

I love this show but since I have the feeling that ryan Guzman got shot and might died.

Don’t think he died ,I seem to remember he was ok

This was an excellent season! SO glad we’re getting another.

I LOVE 911. I record it every Monday so I won’t miss an episode.

Thank you! Thank you!! Thank you for renewing 911 !!!!!! I absolutely love this show! Tonight’s episode was a definite cliffhanger, can’t wait to see what happens next week.

I really like 911. It is one of the few shows I watch regularly. I am totally wrapped up with these characters.