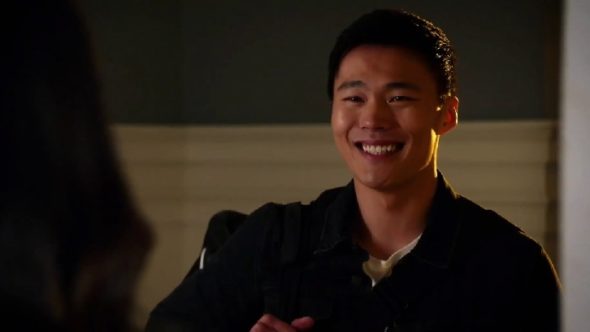 9-1-1 has upped a recurring actor from last season to regular cast member. John Harlan Kim will have a bigger role in the upcoming fourth season of the popular FOX TV series. Viewers may remember Kim as a series regular on TNT’s The Librarians or from recurring roles on recently concluded Hawaii Five-0 (CBS) or Pandora on The CW.

Variety revealed more about Kim’s character on the FOX series:

“Kim recurred last season as Albert Kim, the younger half-brother of firefighter Howie “Chimney” Kim (Kenneth Choi). The brothers had never met until Albert surprised Chimey by showing up on his doorstep from Korea.”

What do you think? Are you a fan of the 9-1-1 TV show? Are you excited to see more of Kim on the FOX series?

I am very exited to see the new season of 9-1-1 and The Resident! They are my favorite shows on tv now!!! Both of these are excellent series. Not really a fan of the 9-1-1 Texas show. I do watch it ok. Not near as good as the original LA series which in my opinion is top notch!

Great show! Bring it back.

I love the show and the cast ❤️ one of my favorite

911 is my favorite show please renew the show !!! I want to see chin and his girlfriend get married and have there child he deserves it and everyone have a good person in there life !!!

9-1-1 is my husband’s and my absolute favorite show on ALL of TV. We never miss it and are so disappointed on the nights it is not shown.

We are not interested in the Kim character returning.

I can take him or leave him. The real question is : when is the show coming back?

I think it will be sometime early 2021 when 9-1-1 returns as well as my other favorite The Resident.