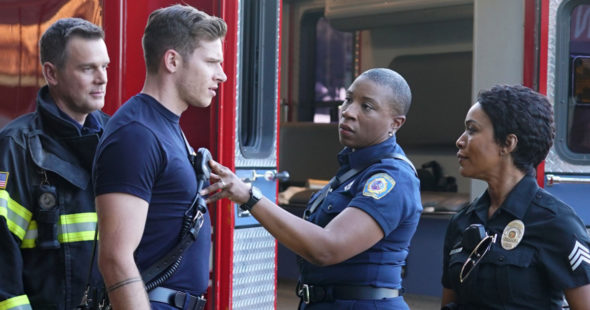 The lives of a certain group of first-responders aren’t going to be getting any easier during the 2019-20 season. FOX has announced that their 9-1-1 TV show has been renewed for a third season. The series currently airs on Monday nights.

A procedural drama, 9-1-1 stars Angela Bassett, Peter Krause, Jennifer Love-Hewitt, Oliver Stark, Aisha Hinds, Kenneth Choi, Rockmond Dunbar, Ryan Guzman, Corinne Massiah, and Marcanthonee Reis. The scripted series, inspired by real-life experiences, centers on the police officers, firefighters, and paramedics who risk their lives to save others. No matter how frightening, dangerous, and shocking a situation may be, these first responders rush toward crises when most others are fleeing.

The second season of 9-1-1 on FOX is currently averaging a 1.47 rating in the 18-49 demographic and 6.22 million viewers. Compared to season one, that’s down by 11% in the demo and down by 2% in viewership. It’s currently the network’s most-watched series and is likely to edge out Empire as FOX’s highest-rated show in the demo this season.

The season three announcement came from Michael Thorn, President, Entertainment, for FOX Entertainment. In a statement, he said, “9-1-1 redefined what a procedural series can be, consistently delivering edge-of-your-seat emergencies, mixed with emotional story arcs and incredible performances from one of the most powerful teams of actors on television. Kudos to Ryan Murphy, Brad Falchuk, Tim Minear and their entire crew, as well as the amazing cast anchored by Angela Bassett, Peter Krause and Jennifer Love Hewitt for raising the bar week after week.”

FOX also renewed The Resident for a third season today. Thorn added, “We want to thank our producing partners, 20th Century Fox Television, who have steered these two extraordinary series. Both 9-1-1 and The Resident have many, many more stories to tell and we can’t wait to deliver them to fans next season.”

What do you think? Do you like the 9-1-1 TV show? Will you be watching season three on FOX next season?

Yes I love the show the characters everything. I can’t stand reality shows or these stupid singing shows

Definitely will be watching season 4.

I will not watch this.

The drama is so intense! The emotional roller coaster you get caught in. Please don’t stop making this show!!!