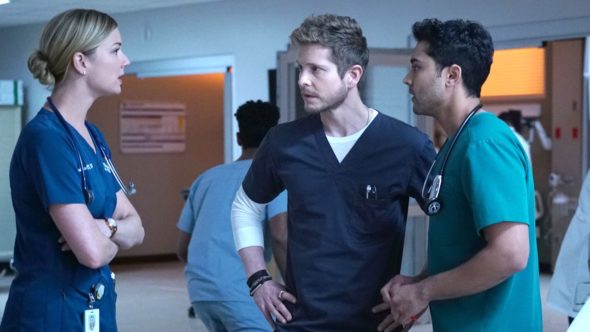 Things aren’t going to get any easier for the staff at Chastain Park Memorial Hospital. FOX has renewed The Resident TV show for a third season. The series currently airs on Monday nights.

A medical drama, The Resident stars Matt Czuchry, Emily VanCamp, Manish Dayal, Shaunette Renée Wilson, Malcolm-Jamal Warner, Jane Leeves, Glenn Morshower, and Bruce Greenwood. The series centers on resident Dr. Devon Pravesh (Dayal), as well as Senior Resident Dr. Conrad Hawkins (Czuchry), and their colleagues at the Chastain Park Memorial Hospital. Although its motto is, “Committed to excellence,” the hospital is staffed with human beings, and humans are flawed. Now that Devon is on the other side of the institution’s velvet ropes, Conrad wants him to understand the reality of medicine and its delivery.

The season three announcement came from Michael Thorn, President, Entertainment, for FOX Entertainment. In a statement, he said, “Amy Holden Jones, Todd Harthan and the team behind The Resident continue to showcase their brilliant storytelling, revealing both the triumphs and tragedy within the medical world. Matt Czuchry, Emily VanCamp and Bruce Greenwood, along with the stellar cast, have developed rich and compelling characters through their heartfelt performances.”

FOX also renewed 9-1-1 for a third season today. Thorn added, “We want to thank our producing partners, 20th Century Fox Television, who have steered these two extraordinary series. Both 9-1-1 and The Resident have many, many more stories to tell and we can’t wait to deliver them to fans next season.”

What do you think? Do you like The Resident TV show? Will you be watching season three on FOX next season?

I love The Resident and look forward to seeing season 4 and more. Keep it going please

I have been watching this show since it started. I loved it until tonight. You just had to get political. Not that you will care but you just lost me . Will not watch anymore. So sick of every show going down this road.

I live for this show on Monday nights and drop everything to watch it. I am hooked.

Love everything about this show. Great cast. Excellent music. Waiting in Venezuela for the next season which I guess is Season 3. Special greetings to Emily VanCamp. This is her third show for me and she just gets better and better.

Love this show, it delves into the intricacies of hospital’s Day to day issues. The different relationships are interesting and keeps you focused.

Love, love, love The Resident!! My favorite show by far. I love the cast and stories. Can’t wait for Season 3.