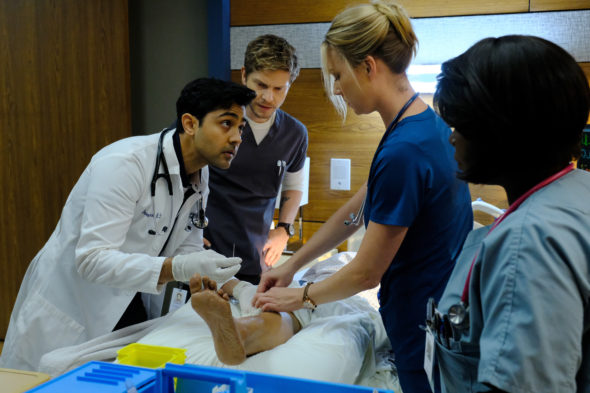 What’s your prognosis on the first season of The Resident TV show on FOX? As we all know, the Nielsen ratings typically play a big role in determining whether a TV show like The Resident is cancelled or renewed for season two. Unfortunately, most of us do not live in Nielsen households. Because many viewers feel frustration when their viewing habits and opinions aren’t considered, we’d like to offer you the chance to rate all of The Resident season one episodes here.

A FOX medical drama, The Resident stars Matt Czuchry, Emily VanCamp, Manish Dayal, Moran Atias, Merrin Dungey, Shaunette Renée Wilson, Melina Kanakaredes, and Bruce Greenwood. The procedural centers on Dr. Devon Pravesh (Dayal), a newly minted resident, as well as Senior Resident Dr. Conrad Hawkins (Czuchry), and their colleagues at the Chastain Park Memorial Hospital. Although its motto is, “Committed to excellence,” the hospital is staffed with human beings, and humans are flawed. Now that Devon is on the other side of the institution’s velvet ropes, Conrad wants him to understand the reality of medicine and its delivery.

What do you think? Which season one episodes of The Resident TV series do you rate as wonderful, terrible, or somewhere between? Should FOX cancel or renew The Resident for a second season? Don’t forget to vote, and share your thoughts, below.

Love the Resident. With so few good series on TV it boggles the mind as to why this should be cancelled. As one reviewer mentioned – a better day and time. It is a good. Series guys – don’t throw it away. The cast is great…

Really enjoying watching this. Was hooked from episode 1. Glad it’s been renewed. Love the relationship that’s formed between Conrad, Devon, Nic and Mina…. I like that there’s humour as well as good honest deep storylines!! So glad it’s been renewed for a 2nd Season….. Brilliant!

Thank you FOX! We are so stoked for season 2 and hopefully season 3, 4, 5… Love The Resident!

I really wish the show will be renewed for season two I believe one of the reasons the ratings are low is the time slot on Mondays It is up against 2 two hour shows The Voice and American Idol both very popular If the day was changed to Tuesday or Wednesday I believe that the ratings would be higher.

I agree. This show is great, but needs a different time slot.

I’m such a huge fan of this show! It’s similar and yet so different to other medical shows and I AM HERE FOR IT! I really, really, really hope it gets renewed for a second season!

This is my new favorite show. It’s so good! Please don’t cancel it. The actor choices are excellent and I don’t have any complaints. ❤️

This show is one of the best and most honest shows I have seen in years. I know the writers and actors have it right! It is a wonderful show. Please continue it for season 2.

Love Matt from previous shows,has grown into role. Love the ensemble and storyline is really just warming up. I hope Malcolm-Jamal Warner will become a regular!!

This is one of the best shows on TV. Please renew for Season 2!!

This is my favorite show … I love it! I have to admit, it is the first time I have watched FOX. Please don’t cancel this show. I couldn’t choose my favorite every episode has been great.