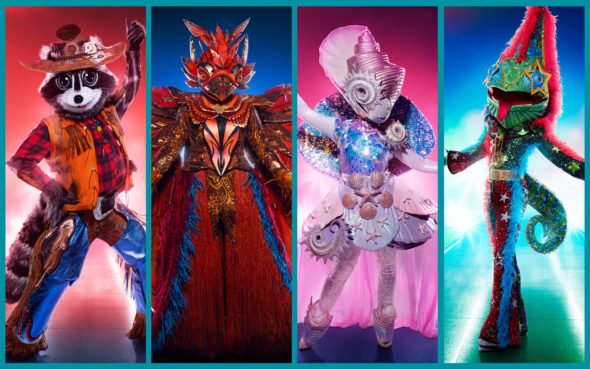 Will the winner be a surprise? Has The Masked Singer TV show been cancelled or renewed for a sixth season on FOX? The television vulture is watching all the latest cancellation and renewal news, so this page is the place to track the status of The Masked Singer, season six. Bookmark it, or subscribe for the latest updates. Remember, the television vulture is watching your shows. Are you?

Airing on the FOX television network, The Masked Singer is hosted by Nick Cannon and features panelists Jenny McCarthy, Nicole Scherzinger, Ken Jeong, and Robin Thicke. Niecy Nash serves as a guest host in some episodes. The show features singing celebrities facing off against one another with one major twist — each contestant is covered from head to toe in an elaborate costume, complete with a full face mask to conceal his or her identity. With each performance, the host, panelists, audience, viewers — and even the other contestants — are left guessing who is singing behind the mask. The costumed characters in season five include Black Swan, Chameleon, Grandpa Monster, Phoenix, Piglet, Porcupine, Raccoon, Russian Dolls, Seashell, and Snail.

The fifth season of The Masked Singer averaged a 1.21 rating in the 18-49 demographic and 5.11 million viewers. Compared to season three (which aired Spring 2020), that’s down by 50% in the demo and down by 41% in viewership. Keep in mind that the third season premiere followed the Super Bowl so those very high numbers positively skew the season averages. Find out how The Masked Singer stacks up against other FOX TV shows.

Will FOX cancel or renew The Masked Singer for season six? Though the ratings have waned, I have no doubt that this show will be renewed, likely for two more cycles for the 2021-22 season. I’ll update this page with breaking developments. Subscribe for free alerts on The Masked Singer cancellation or renewal news.

5/18/21 update: The Masked Singer has been renewed for a sixth season on FOX.

What do you think? Are you glad that The Masked Singer TV show has renewed for a sixth season? How would you feel if FOX had cancelled this TV series, instead?

My family enjoys the show. We all play along trying to figure out the clues and who’s the singer. Please Renew the show. It’s a good family show.

I knew it was going to be renewed it’s a good show.