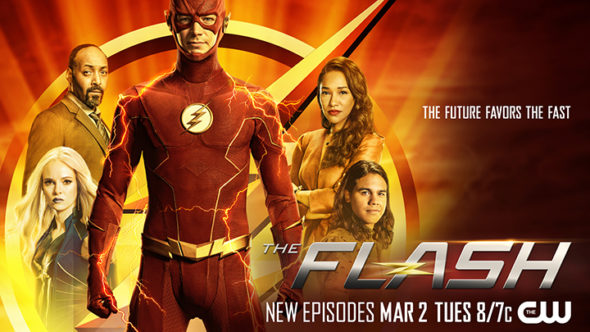 We don’t have to wonder if The Flash will be cancelled this time around since the series has already been renewed for an eighth season. But, will season eight be the end of the series, like it was for Arrow? Will The Flash TV show continue to be one of The CW’s most-watched programs? Stay tuned.

Airing on Tuesday nights, The Flash stars Grant Gustin, Candice Patton, Danielle Panabaker, Carlos Valdes, Danielle Nicolet, Efrat Dor, Tom Cavanagh, Brandon McKnight, Kayla Compton, and Jesse L. Martin. The action-adventure series centers on police scientist Barry Allen (Gustin) who develops super speed after a dark-matter lightning strike. Behind his mask, Barry uses his powers to protect the people of Central City from many an evil force as The Flash. The seventh season picks up where season six left off, with the new Mirror Master (Efrat Dor) victorious and still-at-large in Central City. The Flash must regroup in order to stop her and find a way to make contact with his missing wife, Iris (Patton). With help from the rest of Team Flash, which includes superheroes Caitlin Snow (Panabaker), Cisco Ramon (Valdes) and Nash Wells (Cavanagh), as well as the Flash’s adoptive father Joe West ( Martin), Meta-Attorney Cecile Horton (Nicolet), tough cub reporter Allegra Garcia (Compton) and brilliant tech-nerd Chester P. Runk (McKnight). The Flash will ultimately defeat Mirror Master. But in doing so, he’ll also unleash an even more powerful and devastating threat on Central City: one that threatens to tear his team (and his marriage) apart.

7/21 update: You can see the latest night’s ratings in context.

For comparisons: Season six of The Flash on The CW averaged a 0.44 rating in the 18-49 demographic and 1.26 million viewers.

What do you think? Do you like The Flash TV series on The CW? Are you glad that it’s been renewed for an eighth season?

i would like for a all new flash spin off to start this year or next but i all so know there may or may not be a spin off in till the flash ends in season eight nine or ten.. And if there should be a new speedster on the series the flash legacy i think this new speedster should be a villain who calls him self the reverse flash jr and this speedster would claim to be Eobard thawne son or daughter..

Couldn’t do it any more. Quit watching this mid season 6. Came back to see if maybe it had got better, sounds worse. Nothing but soap opera relationship drama and PC wokeness BS. Just be a comic book show FFS, you’re not changing the world.

Same here. This show should have been cancelled long ago.

DID NOT TUNE IN TO 6 22 21 EPISODE. WILL WATCH SEASON COMPLETELY WHEN RELEASED ON DVD WITHOUT COMMERCIALS AND AT MY LEISURE OR IN A FLASH. I WILL RETURN TO TV AIRINGS UNTIL THE STAR OF THE SHOW DR. WELLS RETURNS.

One of my favorite dc shows I look forward every Tuesday night since aired very episode 1 few years ago. Enjoy it and love it.

WHEN I WAS IN MY DREAMSCAPE LAST NIGHT I STOPPED WATCHING THIS SHOW AFTER 7 YEARS. WAS THIS DREAM REAL OR NO ?