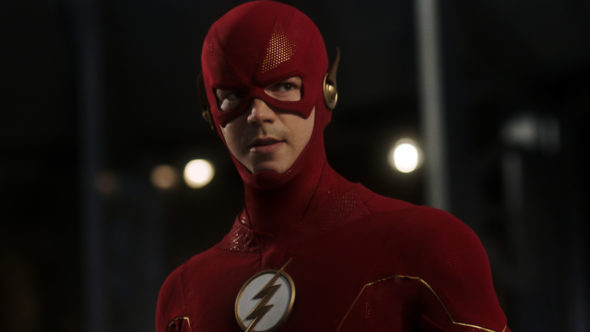 Can Barry and Team Flash keep ahead of the evil that’s coming their way? Has The Flash TV show been cancelled or renewed for an eighth season on The CW? The television vulture is watching all the latest cancellation and renewal news, so this page is the place to track the status of The Flash, season eight. Bookmark it, or subscribe for the latest updates. Remember, the television vulture is watching your shows. Are you?

Airing on The CW television network, The Flash stars Grant Gustin, Candice Patton, Danielle Panabaker, Carlos Valdes, Danielle Nicolet, Efrat Dor, Tom Cavanagh, Brandon McKnight, Kayla Compton, and Jesse L. Martin. The action-adventure series centers on police scientist Barry Allen (Gustin) who develops super speed after a dark-matter lightning strike. Behind his mask, Barry uses his powers to protect the people of Central City from many an evil force as The Flash. The seventh season picks up where season six left off, with the new Mirror Master (Efrat Dor) victorious and still-at-large in Central City. The Flash must regroup in order to stop her and find a way to make contact with his missing wife, Iris (Patton). With help from the rest of Team Flash, which includes superheroes Caitlin Snow (Panabaker), Cisco Ramon (Valdes) and Nash Wells (Cavanagh), as well as the Flash’s adoptive father Joe West ( Martin), Meta-Attorney Cecile Horton (Nicolet), tough cub reporter Allegra Garcia (Compton) and brilliant tech-nerd Chester P. Runk (McKnight). The Flash will ultimately defeat Mirror Master. But in doing so, he’ll also unleash an even more powerful and devastating threat on Central City: one that threatens to tear his team (and his marriage) apart.

The seventh season of The Flash averaged a 0.21 rating in the 18-49 demographic and 820,000 viewers. Compared to season six, that’s down by 52% in the demo and down by 35% in viewership. Find out how The Flash stacks up against other CW TV shows.

We don’t have to wonder if The CW will cancel The Flash since it’s already been renewed for season eight. Could that end up being the end of this superhero series or, will it race onward? I’ll update this page with breaking developments. Subscribe for free alerts on The Flash cancellation or renewal news.

What do you think? Are you glad that The Flash TV show has been renewed for an eighth season? How would you feel if The CW had cancelled this TV series, instead?

Stop please. 8 seasons are enough. I loved the first seasons but now it’s all the same in the last 3-4 years. Someone must need to know when to stop.

Love the program,really don’t want to see Cisco leave that sucks
It is the one program i just don’t miss . I feel like the main characters should not be changed.

Please boost your ratings so good. So happy back on air this season enjoy it. Look forward every episode never missed it. Extremely glad got renewed another season two months before it premiere in January.