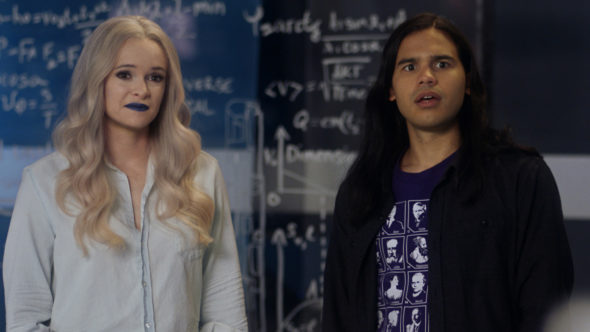 Will Iris and Barry’s marriage be pulled apart in the seventh season of The Flash TV show on The CW? As we all know, the Nielsen ratings typically play a big role in determining whether a TV show like The Flash is cancelled or renewed for season eight. Unfortunately, most of us do not live in Nielsen households. Because many viewers feel frustrated when their viewing habits and opinions aren’t considered, we invite you to rate all of the seventh season episodes of The Flash here.

A CW superhero drama series, The Flash stars Grant Gustin, Candice Patton, Danielle Panabaker, Carlos Valdes, Danielle Nicolet, Efrat Dor, Tom Cavanagh, Brandon McKnight, Kayla Compton, and Jesse L. Martin. The action-adventure series centers on police scientist Barry Allen (Gustin) who develops super speed after a dark-matter lightning strike. Behind his mask, Barry uses his powers to protect the people of Central City from many an evil force as The Flash. The seventh season picks up where season six left off, with the new Mirror Master (Efrat Dor) victorious and still-at-large in Central City. The Flash must regroup in order to stop her and find a way to make contact with his missing wife, Iris (Patton). With help from the rest of Team Flash, which includes superheroes Caitlin Snow (Panabaker), Cisco Ramon (Valdes), and Nash Wells (Cavanagh), as well as the Flash’s adoptive father Joe West ( Martin), Meta-Attorney Cecile Horton (Nicolet), tough cub reporter Allegra Garcia (Compton) and brilliant tech-nerd Chester P. Runk (McKnight). The Flash will ultimately defeat Mirror Master. But in doing so, he’ll also unleash an even more powerful and devastating threat on Central City: one that threatens to tear his team (and his marriage) apart.

What do you think? Which season seven episodes of The Flash TV series do you rate as wonderful, terrible, or somewhere between? Do you think that The Flash should have been cancelled instead of renewed for an eighth season on The CW? Don’t forget to vote, and share your thoughts, below.

I will miss Cisco…However I did enjoy the 3 young ladies on Rayo de Luz. But, someone should have done better job of preparing the 3 ladies for the fight scenes. Or you could have had stunt people doing the fighting. It would be nice if you return all 3 ladies to spice up the show.

Well about time someone did something about THE FLASH ?????? I honestly do not like the way or I should say I HATE HOW SLOW SHOW IS TAKING ????? BERRY SHOULD HAVE GET IRIS OUT OF THE MIRROR TWO YEARS AGO ???? I know it does not take two to three seasons to find and take care of a problem as it does on THE FLASH ???? I know for some reason the righters like to drag out the problem just to make sure you have to watch to see if the SUPER smart people to get Iris out of… Read more »