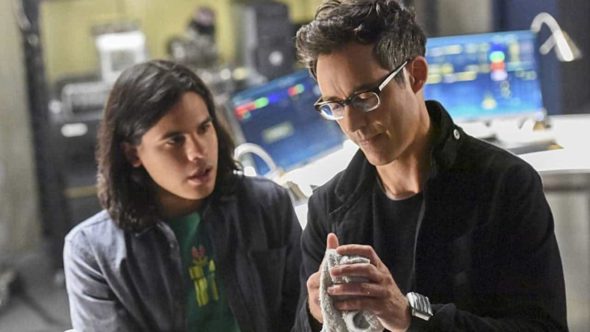 The Flash is losing two of its original cast members. One of the departing series regulars, Tom Cavanagh, already left the series three episodes into season seven. He was meant to depart at the end of season six, but those episodes were delayed due to the pandemic. He’s expected to return at some point this season in a guest role. Cavanagh (above, right) has been on the series as both friend and foe during the past seven seasons.

The second departure is Carlos Valdes (above, left). He has played Cisco Ramon, the right-hand man and genius behind so much of the tech Barry Allen uses as The Flash, since the start of the series. His character will exit at the end of season seven.

With Cavanagh and Valdes leaving, only four original members of The Flash cast remain on the show for season eight.  Star Grant Gustin has already signed on and Candice Patton, Danielle Panabaker, and Jesse L. Martin have been negotiating new deals to return.

Showrunner Eric Wallace said the following about the departures, per Deadline:

“Tom and Carlos have been an integral part of our show for seven seasons, and will be greatly missed. Both are incredible talents who created beloved characters that fans and audiences around the world have come to love. Which is why we are happily keeping the door open for return appearances.

What do you think? Are you surprised by these exits on The Flash? Do you plan to continue watching the series through season seven and beyond?

good for them, should have left few seasons earlier to not sink with the ship.

Oh wow. I haven’t watch this show since season 4. Thought about getting back into it but it stinks that they’re leaving.

This show hasn’t been the same for awhile now.I’m hanging in there hoping it gets better. Losing these two guys really truly sucks – especially Ramon. I wish them both well. At least we’ll still have guest appearances in the future. That’s not much but I’ll take it. I wonder who’ll come up with the names for the metas now? Anyway I wish both of them the best of luck.

please boost your ratings so good my opinion enjoy it and love it. Look forward every episode never missed aired on tv. Worth watching too bad Cisco, Dr.Wells like him other stuff this show very aggravating character reappearing.

I am so disappointed that Carlos(Cisco) is leaving, I loved his character and enjoyed what he gave into the show, won’t be the same without him on the show. He will be very missed hope that he will return some day in the future.