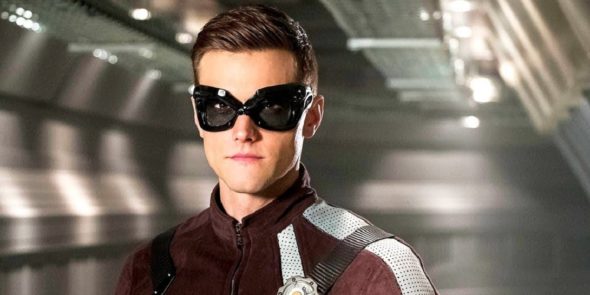 The Elongated Man is no more. According to The Hollywood Reporter, The Flash has fired star Hartley Sawyer after a series of racist and misogynistic recently re-surfaced.

On Twitter, The Flash showrunner Eric Wallace announced Sawyer will not be returning for season seven of The Flash. The actor’s twitter account has been suspended, but several tweets of his contained racist, misogynistic, and homophobic language. See the CW’s official statement as well as Wallace’s announcement and Sawyer’s apology below.

“Hartley Sawyer will not be returning for season seven of The Flash. In regards to Mr. Sawyer’s posts on social media, we do not tolerate derogatory remarks that target any race, ethnicity, national origin, gender, or sexual orientation. Such remarks are antithetical to our values and polices, which strive and evolve to promote a safe, inclusive and productive environment for our workforce.”

My statement regarding Hartley Sawyer and THE FLASH. pic.twitter.com/hni0MxOWZU

What do you think? Do you watch The Flash? Do you think The CW made the right call?

Mr. Hartley you say that you are sorry. Would you have apologized and owned up to what you said if you HADN’T been caught and been told to own up to what you did? I ask this because I am a 66 year old woman and feel very offended by someone whom I enjoyed watching every week. Yes I know that I don’t KNOW the people that I watch. Thank you for reminding me just how little I DO know about the people I watch. I certainly am shocked about ONE of them. Good luck in the future. Unfortunately I’m… Read more »

You won’t believe how many the fans want him back for next season.
https://www.change.org/p/warner-brothers-bring-back-hartley-sawyer-to-the-flash

Yes he made a mistake and seems to be sincere in his apology, but let’s be clear this has nothing to do with him as the producer clearly states that he will be employing more black and brow writers for the show to tell the stories. In my opinion this seems to be nothing more than a ploy for the producer to simply satisfy his own agenda and utilizing the current mass hysteria to get it done. I have been a loyal supporter since the very beginning and love every actor and actress that has been a part of this,… Read more »

Cancel Culture strikes again. They claim they want justice for all but, if you “offend” them…you must be destroyed. CW is dead wrong. I’ve watched my last CW program.

I’m not making a judgement call just pointing to a way to be fully informed of what his tweets were.

I can only go by what everyone else is saying considering I have not seen the tweets and I wouldn’t condone what he said based on the nature of what the posts have been said to be. But one thing is for certain and that is that people can change. The statement that he released definitely did look like it was typical PR jargon, but there’s nothing to imply that he couldn’t have had some sort of falling-out over the years with close friends or something that would have helped him to realize that what he said and possibly felt… Read more »

I don’t condone let alone applaud any actions that people say or do nor am I innocent of never saying or doing stupid things in my past . I do feel that this happened far to long ago to just now decide that you are going to take action against Hartley. Personally I was not very fond of the Ralph Dibney character at first because I just felt that he was a stooge, but I have come to look for each of the cast in each airing of this show. I have been a longtime fan of the show and… Read more »

The CW will be bankrupted soon. Just wait.

Hardly, it’s run cost effectively and co-owned by Warner Brothers and CBS. The Affiliates are happy and post-airing Streaming on the CW App and Website, and time-shifting are all good.

This witch hunt must stop! What this guy said was behind him. This is a minor felony. Whats next? Fire every person who supported Trump or said anything nonsense about politics? Is these big media companies really entitled to give lessons about what is racist or homophobic? The media itself has its past and it is not glorious as they wanna sell to the people

I.watch the flash I do not care for Hartley but if is things were in the past why not forgive it’s sad but the guy the passed way was killed by a police that sucks because this police going only to jail and now make a big thing and fire a guy you Americans should love one another don’t matter what race

Too bad that Hartley Sawyer didn’t see the fact that what he tweeted in his past came back to haunt his present and future. CW knew what he tweets in his past would come to haunt the show and the show producer see that there will be an uproar if they didn’t fire him. It will be very interesting to see if Hartley Sawyer will be replaced in his role.

I’m not so sure that They were aware of the older tweets until recently, studios don’t investigate an actor’s social history past until it’s brought to their attention.

some of what he said was not ok but we have all done stupid stuff in our younger years and to ruin his career over old tweets is nuts. that’s why I closed down all my social media accounts a few years ago not because I said wrong things but because small jokes that’s seem funny at 19 can ruin you in your 30s.

when I wrote 19 I was talking about myself and I go on to say I closed my accounts down and stupid things I did not Hartley I should have been more clear I guess.

Cancel culture sucks. I guess you can’t apologize for mistakes and actually get forgiveness anymore. If he’s sincere, accept the apology and move on. I love him on Team Flash. Sad to see him go over something that could have been used as teachable moment (PSA) vs. saying make a mistake and you’ll not only never live it down but you’ll be fired. Way to go CW!

This “apology” was generic and seen by many celebs that have been caught saying or doing something stupid and dickish.

It was hardly “Generic”, I believe he was sincere – how do you know what is in one person’s heart and soul and how they are sorry and repentant? I take him at his word. He made stupid mistakes,was called out,he’s lost his job, perhaps his career. Unlikely he’ll be invited to Cons when they start up again, and no casting director will want him around. I also beleive when he said he has changed since the posted those tweets years ago. People Can and Do Change for the better.

There’s plenty that can be learned from Sawyer’s firing.

These were obviously jokes from his much younger years, but OK CW. You get all bent out of shape because of the current rioting. Have your feel good moment even if you’re destroying a kid’s career.

you keep talking about his age yes he was 29 but people of any age can make mistakes and say stupid things we all have a past no one is only good we have all at one point in our life done and said things we regret and its what we learn from the regret that matters anyone can change but what kind of a world do we live in where no one will let us learn from our mistakes and try and do better in the future, we just fire or shame people and never offer to help them… Read more »