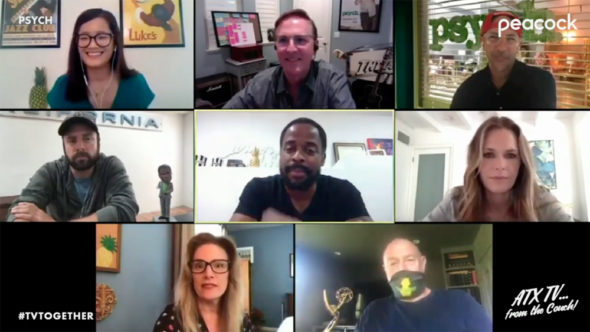 Psych is returning for another reunion movie. Timothy Omundson is playing a bigger role in this sequel movie. Chris Henze spoke about the actor’s return during the ATX virtual event. James Roday, Dule Hill, Kirsten Nelson, Maggie Lawson, and Corbin Bernsen star in the series.

He said the following about the Psych movie, per Deadline:

“We’re trying to accomplish the same thing we always wanted to accomplish which is giving our core fans everything they expect. And most importantly, Tim was the anchor of that.”

Maggie Lawson also spoke about Tim’s return. Their characters are partners in the series. She said the following:

“Steve gave Tim and I a lot of freedom. At one point he actually said ‘be Maggie and Tim in this scene’ and neither one of us could get through it because we were both so emotional. He’s so good in this movie and all of us were very present in it from the very beginning. For me, it felt like our family was whole again.”

The new Psych movie. Psych 2: Lassie Comes Home, will land on Peacock on the day it arrives.

What do you think? Are you excited for more Psych?

Would be nice if it was on a channel I could watch. Not everyone is rich enough to pay for all these extra channels and streaming services. I absolutely love Psych and am extremely disappointed I won’t be able to see it.

Loved this bunch of oddball characters. It is awesome to have Lassie back. He did such good work on This Is Us. It will be great to see what he & Jules come up this time around.