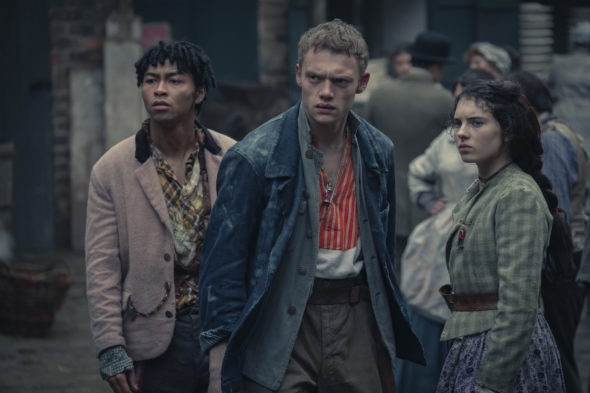 Will the entire gang survive the first season of The Irregulars TV show on Netflix? As we all know, the Nielsen ratings typically play a big role in determining whether a TV show like The Irregulars is cancelled or renewed for season two. Netflix and other streaming platforms, however, collect their own data. If you’ve been watching this TV series, we’d love to know how you feel about the first season episodes of The Irregulars here.  *Status Update Below.

A Netflix supernatural crime drama series, The Irregulars is loosely based on the works of Sir Arthur Conan Doyle and stars Thaddea Graham, Darci Shaw, Mckell David, Harrison Osterfield, Jojo Macari, Henry Lloyd-Hughes, Royce Pierreson, Clarke Peters, Olivia Grant, and Aidan McArdle. Set in Victorian London, the series follows a gang of troubled and ragtag street teens, aka The Irregulars, who are manipulated into solving crimes for the arrogant and cagey Doctor Watson (Pierreson) and his mysterious business partner, the elusive Sherlock Holmes (Lloyd-Hughes). The teen gang includes Bea (Graham), Jessie (Shaw), Spike (David), Leo (Osterfield), and Billy (Macari). As the crimes take on a horrifying supernatural edge and a dark power emerges, it’s up to the Irregulars to come together to save not only London but the entire world.

What do you think? Which season one episodes of The Irregulars TV series do you rate as wonderful, terrible, or somewhere between? Do you think that The Irregulars on Netflix should be cancelled or renewed for a second season? Don’t forget to vote, and share your thoughts, below.

I love the show l would like to see season two

The Irregulars is very interesting and fascinating. I wish there would be a 2nd season.