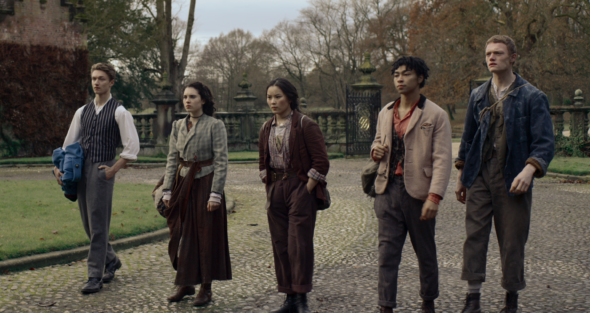 It looks like this gang of teens is history. Netflix has cancelled The Irregulars TV series so, there won’t be a second season.

A British supernatural crime drama series, The Irregulars is loosely based on the works of Sir Arthur Conan Doyle and stars Thaddea Graham, Darci Shaw, Mckell David, Harrison Osterfield, Jojo Macari, Henry Lloyd-Hughes, Royce Pierreson, Clarke Peters, Olivia Grant, and Aidan McArdle. Set in Victorian London, the series follows a gang of troubled and ragtag street teens, aka The Irregulars, who are manipulated into solving crimes for the arrogant and cagey Doctor Watson (Pierreson) and his mysterious business partner, the elusive Sherlock Holmes (Lloyd-Hughes). The teen gang includes Bea (Graham), Jessie (Shaw), Spike (David), Leo (Osterfield), and Billy (Macari). As the crimes take on a horrifying supernatural edge and a dark power emerges, it’s up to the Irregulars to come together to save not only London but the entire world.

News of the cancellation comes a little over a month after the series’ March 26th premiere. We know that decisions about a Netflix show’s fate are often made once 4-6 weeks of streaming viewing data is collected.

Nielsen estimated that The Irregulars was the most-watched streaming show for the week of March 29th – April 4th with 643 million minutes streamed across all of the season’s eight episodes (not including mobile viewing). It edged out The Falcon and The Winter Soldier on Disney+ with an estimated 628 million minutes streamed across the three episodes that were available at that time.

What do you think? Did you enjoy the first season of The Irregulars on Netflix? Were you looking forward to watching season two?

I liked it a lot. I would be glad if this series continued.

Maybe if you hadn’t used the F-bomb and showed bared arses…..parents wouldn’t have been so easy to click it off so soon. It was out performing The Falcon and The Winter Soldier till those episodes. Come on! Parents want stuff they can watch with the kids without feeling uncomfortable.
I loved the show but wouldn’t want my Marvel loving preteen to watch!

It’s was AMAZING! Quit canceling brilliant shows! Me and my friends and family were waiiiiiiting on season 2& now I find out it’s canceled!!!!! Wtf?! We all got together to watch it! We want season 2 & 3& 4&5&6&7&8 ! I can’t believe y’all canceled it! BRING THE SHOW BACK! Y’all are throwing away $ by canceling this show! It was about to be EVERYWHERE! Which it IS! We’re so disappointed!!!!!!

saw the first show. did not care for it. had nothing to do with Sherlock. too bad. it could have been better. will not miss it.

They were is daughters and he comes into play later on.

I liked the Irregulars, was looking forward to more seasons.

That was a great series.i love it!!