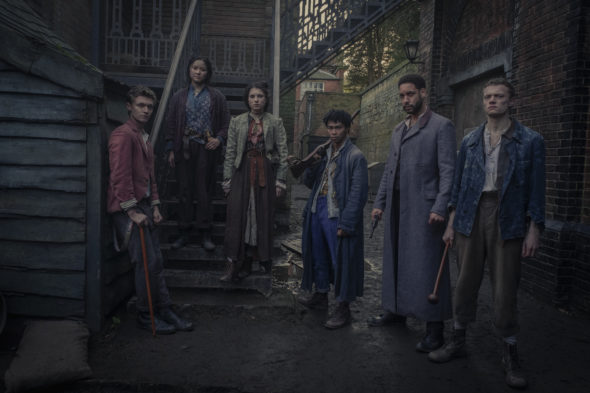 TV show description:
A supernatural crime drama series, The Irregulars was created by Tom Bidwell and is loosely based on the works of Sir Arthur Conan Doyle.

Set in Victorian London, the series follows a gang of troubled and ragtag street teens, aka The Irregulars, who are manipulated into solving crimes for the arrogant and cagey Doctor Watson (Pierreson) and his mysterious business partner, the elusive Sherlock Holmes (Lloyd-Hughes).

Bea (Graham) is the de facto head of the gang. A 17-year-old who strives to take care of her younger sister and to keep their best friends out of trouble, Bea has no idea where their work for Watson will take them.

Bea’s 15-year-old sister, Jessie (Shaw), struggles to come to terms with her profound psychic powers, fearing that her gift will alienate her from her friends — if her nightmares don’t kill her first.

While Spike (David) would much prefer to just use his natural charm to help his friends and
strengthen their bonds, Spike discovers he can also be courageous when any one of them, especially Jessie, is in mortal danger.

Cloistered in the royal palace because he’s a hemophiliac, 17-year-old Prince Leopold (Osterfield) would rather live as the more down-to-earth Leo in London, and not just because he’s in love with Bea.

Tough boy Billy (Macari) has carried a torch for Bea since they met as children in the workhouse, and he really doesn’t like it when fancy newcomer Leo catches her eye instead.

As the crimes take on a horrifying supernatural edge and a dark power emerges, it’s up to the Irregulars to come together to save not only London but the entire world. Meanwhile, guess which legendary sleuth will get the credit?

Series Finale:
Episode #8 — Chapter Eight: The Ecstasy of Life
As London descends into chaos, Bea and her crew head underground, where together they face untold terror in a dangerous quest to locate the rip.
First aired: March 26, 2021.

What do you think? Do you like The Irregulars TV show? Do you think it should have been cancelled or renewed for a second season?