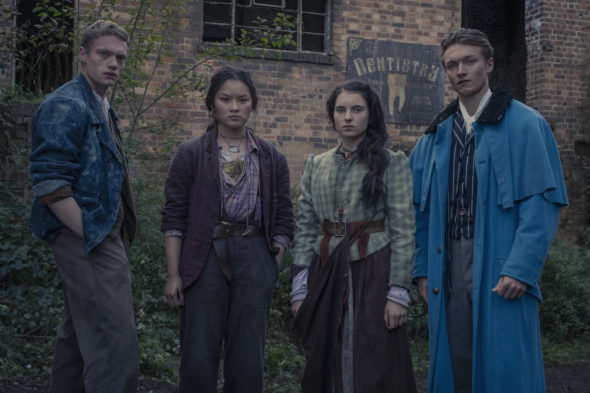 Is a renewal “elementary”? Has The Irregulars TV show been cancelled or renewed for a second season on Netflix? The television vulture is watching all the latest cancellation and renewal news, so this page is the place to track the status of The Irregulars, season two. Bookmark it, or subscribe for the latest updates. Remember, the television vulture is watching your shows. Are you?

Streaming on the Netflix subscription service, The Irregulars is loosely based on the works of Sir Arthur Conan Doyle and stars Thaddea Graham, Darci Shaw, Mckell David, Harrison Osterfield, Jojo Macari, Henry Lloyd-Hughes, Royce Pierreson, Clarke Peters, Olivia Grant, and Aidan McArdle. Set in Victorian London, the series follows a gang of troubled and ragtag street teens, aka The Irregulars, who are manipulated into solving crimes for the arrogant and cagey Doctor Watson (Pierreson) and his mysterious business partner, the elusive Sherlock Holmes (Lloyd-Hughes). The teen gang includes Bea (Graham), Jessie (Shaw), Spike (David), Leo (Osterfield), and Billy (Macari). As the crimes take on a horrifying supernatural edge and a dark power emerges, it’s up to the Irregulars to come together to save not only London but the entire world.

Unless they decide to publicize viewership, it is difficult to predict whether Netflix will cancel or renew The Irregulars for season two. Since Netflix isn’t ad-supported, it can take a chance on series it believes in, but sooner or later it comes down to production costs, versus viewership numbers. Generally speaking, Netflix TV shows which are going to be renewed are usually picked up within a month or so of the series or season premiere. My gut tells me this show will be renewed but we’ll have to wait and see. I’ll keep my ears open and an eye out for news and will update this page with breaking developments. Subscribe for free alerts on The Irregulars cancellation or renewal news.

5/5/2021 update: The Irregulars has been cancelled on Netflix.

What do you think? Did you want The Irregulars TV show to be renewed for a second season? Are you sorry that Netflix cancelled this TV series, instead?

Keep it going. I was thinking more than one would have powers.