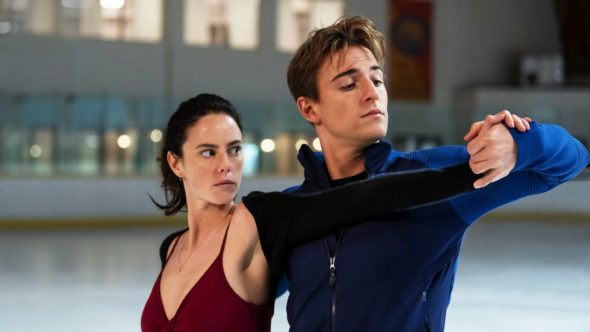 Is this series worthy of a gold medal? Has the Spinning Out TV show been cancelled or renewed for a second season on Netflix? The television vulture is watching all the latest cancellation and renewal news, so this page is the place to track the status of Spinning Out, season two. Bookmark it, or subscribe for the latest updates. Remember, the television vulture is watching your shows. Are you?

Streaming on the Netflix subscription service, Spinning Out stars Kaya Scodelario, Willow Shields, Evan Roderick, David James Elliott, Sarah Wright Olsen, Svetlana Efremova, Amanda Zhou, Mitchell Edwards, Kaitlyn Leeb, Will Kemp, and January Jones. The show revolves around a figure skating Olympic hopeful who battles her personal demons and faces drama both on and off the ice. Kat Baker (Scodelario) is an up-and-coming, high-level single skater who’s about to turn in her skates after a devastating fall took her off the competition track. When Kat seizes an opportunity to continue her career as a pair skater with a talented and wealthy bad-boy partner named Justin Davis (Roderick), she risks exposing a fiercely kept secret that could unravel her entire life.

Unless they decide to publicize viewership, it is difficult to predict whether Netflix will cancel or renew Spinning Out for season two. Since Netflix isn’t ad-supported, it can take a chance on series it believes in and stories that need telling, but sooner or later it comes down to production costs, versus viewership numbers. Generally speaking, Netflix TV shows which are going to be renewed are usually picked up within a month or so of the series or season premiere. I’ll keep my ears open and an eye out for news, and will update this page with breaking developments. Subscribe for free alerts on Spinning Out cancellation or renewal news.

2/4/20 update: Netflix has cancelled Spinning Out so, there won’t be a second season.

What do you think? Were you hoping that the Spinning Out TV show would be renewed for a second season? Are you sorry that Netflix cancelled this TV series, instead?

I enjoyed Spinning Out and wish for Season 2. Love the drama in a seldom highlighted world, the world I’d figure skating. I really like Justin and Kat together. They have real chemistry. Enough of Carol’s PTSD episodes…

wish there was a second season as well. Good chemistry with Justin and Kat.