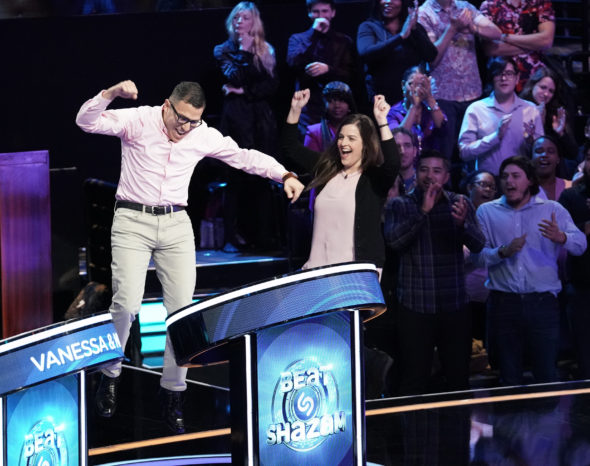 Does the third season of the Beat Shazam TV show on FOX give you something to sing about? As we all know, the Nielsen ratings typically play a big role in determining whether a TV show like Beat Shazam is cancelled or renewed for season four. Unfortunately, most of us do not live in Nielsen households. Because many viewers feel frustration when their viewing habits and opinions aren’t considered, we’d like to offer you the chance to rate all of the Beat Shazam season three episodes here. *Status update below.

A FOX interactive, musical game show hosted by Jamie Foxx, Beat Shazam features a group of two-player teams, who race against the clock, and each other, to identify song selections. During each round, Foxx presents a choice of two musical categories. The object is to be the first team to correctly identify the song’s title. While low-scoring teams are eliminated, the team which banks the most money will ultimately advance to compete against the Shazam app, for a chance at a huge cash prize. Corinne Foxx returns as the Deejay in the third season.

What do you think? Which season three episodes of the Beat Shazam TV series do you rate as wonderful, terrible, or somewhere between? Should FOX cancel or renew Beat Shazam for a fourth season? Don’t forget to vote, and share your thoughts, below.

*Update: FOX has renewed Beat Shazam for a fourth season.

I miss Beat Shazam . I had turned so many people onto that show, had gatherings to watch and play along. I even told many of my elderly patients to watch it on Monday nights.
Please bring that show back !

Please renew Season 4 of Best Shazam. My favorite show EVER. I’m going to also try to get on the show!!!