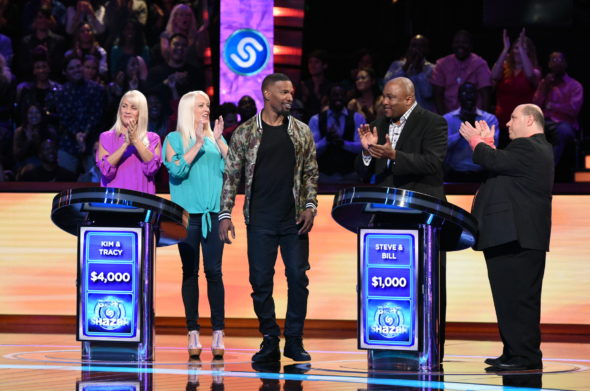 Which stars are coming to Beat Shazam? This week, FOX announced the celebrity guests for the TV show’s upcoming second season.

Hosted by Jamie Foxx, the game show features a group of two-player teams, who race against the clock, and each other, to identify song selections. Season two will feature appearances by Lance Bass, Ginuwine, Bell Biv DeVoe, Kareem Abdul-Jabar, Demi Lovato, and more.

Season two of Beat Shazam premieres on FOX on May 29th at 8 p.m. ET/PT.

THE STARS ARE COMIN’ IN HOT THIS SUMMER!

DON’T MISS THE BIGGEST PARTY OF THE SUMMER, FEATURING HIT SONGS FROM EVERY DECADE, ON SEASON TWO OF “BEAT SHAZAM,” PREMIERING TUESDAY, MAY 29 @ 8/7c ON FOX!

Grammy-, Golden Globe- and Academy Award-winning actor and musician Jamie Foxx (“Ray,” “Django Unchained”) returns as host and executive producer for Season Two of BEAT SHAZAM. Actress, model and writer Corinne Foxx, daughter of Jamie Foxx, joins BEAT SHAZAM as the new deejay. BEAT SHAZAM is a unique and interactive game show in which teams of two race against the clock and each other as they attempt to identify the biggest hit songs of all time. In the end, the team with the highest score will outlast the competition and go against Shazam, the popular song identification app, for the chance to win up to one million dollars. Viewers also can play along with BEAT SHAZAM’s Webby Award-winning play-at-home game, available exclusively on the Shazam app. During each all-new episode, viewers can compete to win a $10,000 cash prize. Download the app, Shazam the show during the live broadcast or on video on-demand to compete and enter to win. Executive-produced by Mark Burnett (“Survivor,” “The Voice”) and Jeff Apploff (“Don’t Forget the Lyrics!”), Season Two will premiere Tuesday, May 29 @ 8/7c on FOX. BEAT SHAZAM was created by Jeff Apploff and Wes Kauble and is produced by Apploff Entertainment and MGM Television in association with Shazam. Mark Burnett, Jeff Apploff, Barry Poznick, Rich Riley, Lauren Zalaznick and Jamie Foxx serve as executive producers.”

What do you think? Have you seen Beat Shazam? Will you watch the new season?

Yes, yes…Looking forward to it. Enjoyed it so much. Like the oldies best.