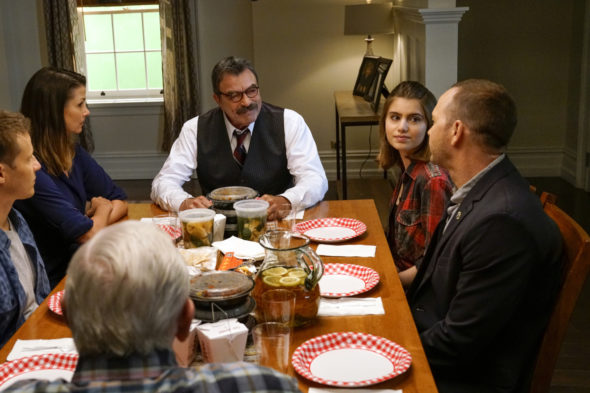 Does the thin, blue line which is the Reagan family still stand in the eighth season of the Blue Bloods TV show on CBS? As we all know, the Nielsen ratings typically play a big role in determining whether a TV show like Blue Bloods is cancelled or renewed for season nine. Unfortunately, most of us do not live in Nielsen households. Because many viewers feel frustration when their viewing habits and opinions aren’t considered, we’d like to offer you the chance to rate all the season eight episodes of Blue Bloods for us here.

What do you think? Which season eight episodes of the Blue Bloods TV series do you rate as wonderful, terrible, or somewhere between? Should CBS cancel or renew Blue Bloods for a ninth season? Don’t forget to vote, and share your thoughts, below.

Blue Bloods is mine and my father’s favorite show to watch. He introduced me to this show about a year ago now and I have been hooked to this show ever since. I hope Blue Bloods gets renewed for another season because it is by far the best and most suspenseful crime and/or cop show on TV. The actors and actresses do an outstanding job which easily makes this show one to binge watch. That said, I give this show a two thumbs-up, a five-star rating, but above all else, I have and give the upmost respect to all of… Read more »

Please, I am disabled, and most of my time is in bed, blood blue is my favorite show, I have watched it over and over, can not think about it not been on, thank you

Please dont cancel this show. Its one of the best family shows on tv!!!!

I WISH YOU COULD GET KONO & CHIN BACK. LOVED BOTH OF THEM
WISH DANNY WAS IN MORE SCENES.

This has been a thought provoking series since the beginning. It has really hit on some serious issues that have been in the news all over this country. And what a fantastic cast of regulars and guest stars!

Please do not cancel this show I love the show

My ultimate favorite show . Tom Selleck is so awesome of an actor…. He’s so seasoned..
I love the whole cast ..please continue …

I did like Blue Bloods when they had Danny’s wife in it. However, they now got rid of her, so it is no longer interesting.

Love the show please dont cancel I even watch the replys ,a great show