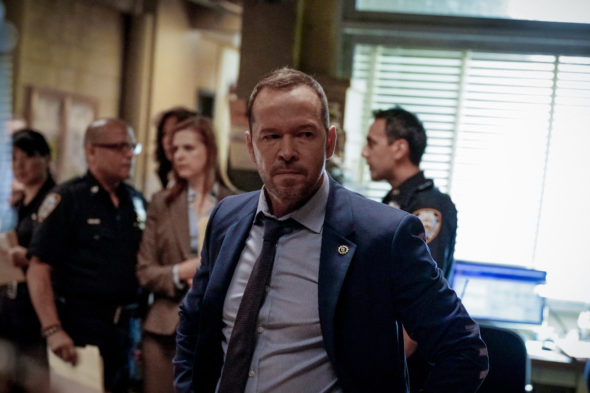 Is the Reagan family still upholding law and order in the Big Apple? Has the Blue Bloods TV show been cancelled or renewed for a 10th season on CBS? The television vulture is watching all the latest TV cancellation and renewal news, so this page is the place to track the status of Blue Bloods, season 10. Bookmark it, or subscribe for the latest updates. Remember, the television vulture is watching your shows. Are you?

The ninth season of Blue Bloods averaged a 0.79 rating in the 18-49 demographic and 8.43 million viewers. Compared to season eight, that’s down by 13% and 7%, respectively. Find out how Blue Bloods stacks up against the other CBS TV shows.

Will CBS cancel or renew Blue Bloods for season 10? The numbers are down once again but the ratings are still pretty good for a Friday night series on CBS. Sooner or later though, it’s going to end and I’ll have my feast. For now, I’ll keep an eye on the Nielsens and will update this page with breaking developments. Subscribe for free updates on any Blue Bloods cancellation or renewal news.

What do you think? Are you glad that the Blue Bloods TV show has been renewed for a tenth season? If it were up to you, when would this CBS TV series end?

Blue Bloods is a classic. Its scope of human activity is profound, respectful, erudite, loving and gracious. Hope Blue Bloods will never end.