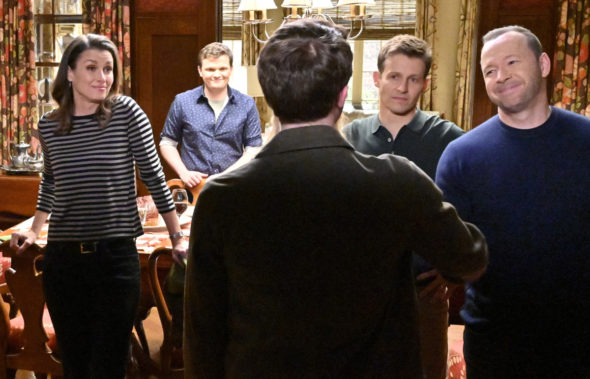 What’s ahead for the Reagans? Has the Blue Bloods TV show been cancelled or renewed for a 12th season on CBS? The television vulture is watching all the latest cancellation and renewal news, so this page is the place to track the status of Blue Bloods, season 12. Bookmark it, or subscribe for the latest updates. Remember, the television vulture is watching your shows. Are you?

The 11th season of Blue Bloods averaged a 0.53 rating in the 18-49 demographic and 6.45 million viewers. Compared to season 10, that’s down by 19% in the demo and down by 16% in viewership. Find out how Blue Bloods stacks up against other CBS TV shows.

Will CBS cancel or renew Blue Bloods for season 12? This show has been very successful for the network but all things have to end sometime. I don’t think Blue Bloods will come to a close just yet but, if Selleck decides he’s done, I think the show is too. I’ll update this page with breaking developments. Subscribe for free alerts on Blue Bloods cancellation or renewal news.

What do you think? Are you glad that the Blue Bloods TV show has been renewed for a 12th season? How would you feel if CBS had cancelled this TV series, instead?

I love Blue Bloods and have watched it from the beginning! So glad it was renewed!

I am so glad Blue Blood is coming back. I can’t wait to see season 12. Friday’s I look forward in watching my favorite TV show.

Great to see Blue Bloods series 12 is confirmed. Lets hope they manage to increase the episode count up to previous levels

Awesome love this show, they keep it interesting, characters are great and love the family dinners! = )

I love the blue blood series I would like to see them continue on with a lot more. One of the best shows ever made for tv.

This is one of my all time favourite series

I love Tom Selek. Blue Blood is one very good family show. I is a real skow.