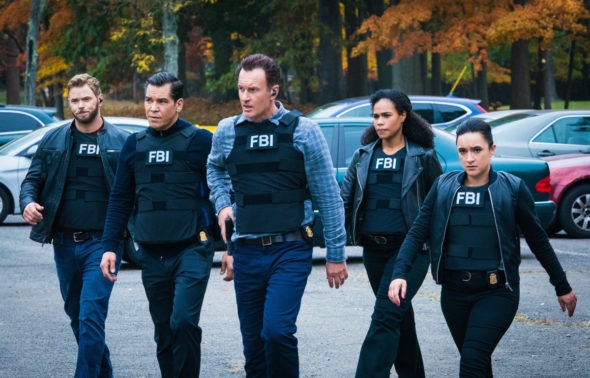 Can this series remain one of CBS’ top shows? Has the FBI: Most Wanted TV show been cancelled or renewed for a third season? The television vulture is watching all the latest cancellation and renewal news, so this page is the place to track the status of FBI: Most Wanted, season three. Bookmark it, or subscribe for the latest updates. Remember, the television vulture is watching your shows. Are you?

Airing on the CBS television network, FBI: Most Wanted is a spin-off of the FBI TV series. The show stars Julian McMahon, Kellan Lutz, Roxy Sternberg, Keisha Castle-Hughes, and Nathaniel Arcand with Lorne Cardinal, Irene Bedard, and Terry O’Quinn in recurring roles. The story focuses on the work of the Fugitive Task Force, a team that tracks and captures the notorious criminals on the Federal Bureau of Investigation’s Most Wanted list. The highly skilled agents function as a mobile undercover unit that’s always out in the field, pursuing those who are most desperate to elude justice. Jess LaCroix (McMahon), a seasoned but enigmatic agent, oversees the team which includes former NYPD detective Sheryll Barnes (Sternberg); data analyst Hana Gibson (Castle-Hughes); Army intel veteran Kenny Crosby (Lutz); and deadly marksman Clinton Skye (Arcand).

The second season of FBI: Most Wanted averaged a 0.58 rating in the 18-49 demographic and 5.76 million viewers. Compared to season one, that’s down by 23% in the demo and down by 18% in viewership. Find out how FBI: Most Wanted stacks up against other CBS TV shows.

Will CBS cancel or renew FBI: Most Wanted for season three? In its first year, this series was CBS’ highest-rated new show of the season. On top of that, it’s produced by Dick Wolf, the force behind NBC’s Chicago and Law & Order franchises, so I have no doubt that FBI: Most Wanted will be renewed by CBS. I’ll update this page with breaking developments. Subscribe for free alerts on FBI: Most Wanted cancellation or renewal news.

What do you think? Are you glad that the FBI: Most Wanted TV show has been renewed for a third season? How would you feel if CBS had cancelled this TV series, instead?

I love this show!! I look forward to every week!!

Personally I’m getting fed up with old TV networks altogether. I like streaming because there are many shows I wait till they end so I can binge watch. I used to like CBS the most. When they started ending a series after 1 or 2 seasons and leave too many of us hanging we get upset. I know others agree with me and we are people who don’t ever answer polls or make suggestions. Basically we don’t count. My first network a am going to abandon is CBS. I am done with them. At least on Netflix or Amazon I… Read more »

Much like Dick Wolf’s Chicago Law this show is another dog badge under Dick Wolf name. The acting and scripting in it are not great and some of the story lines are unrealistic to be polite! Also unlike the old Law and Order series which were great, his shows now seem to focus on to much family drama in the lives of the main characters! Why this got a second season is beyond me, but I hope that season will be the last for this awful show with it collage of stereotype characters in the main roles!

We really like Most Wanted. We were really glad to see it premier last week. Hope it stays around for many years.