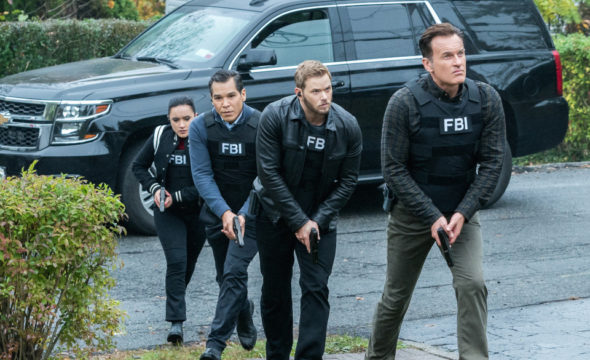 How many felons will the team capture in the second season of the FBI: Most Wanted TV show on CBS? As we all know, the Nielsen ratings typically play a big role in determining whether a TV show like FBI: Most Wanted is cancelled or renewed for season three. Unfortunately, most of us do not live in Nielsen households. Because many viewers feel frustration when their viewing habits and opinions aren’t considered, we invite you to rate all of the second season episodes of FBI: Most Wanted here.  *Status Update Below.

A CBS police procedural series, FBI: Most Wanted is a spin-off of the FBI TV series. The show stars Julian McMahon, Kellan Lutz, Roxy Sternberg, Keisha Castle-Hughes, and Nathaniel Arcand with Lorne Cardinal, Irene Bedard, and Terry O’Quinn in recurring roles. The story focuses on the work of the Fugitive Task Force, a team that tracks and captures the notorious criminals on the Federal Bureau of Investigation’s Most Wanted list. The highly skilled agents function as a mobile undercover unit that’s always out in the field, pursuing those who are most desperate to elude justice. Jess LaCroix (McMahon), a seasoned but enigmatic agent, oversees the team which includes former NYPD detective Sheryll Barnes (Sternberg); data analyst Hana Gibson (Castle-Hughes); Army intel veteran Kenny Crosby (Lutz); and deadly marksman Clinton Skye (Arcand).

What do you think? Which season two episodes of the FBI: Most Wanted TV series do you rate as wonderful, terrible, or somewhere between? Do you think that FBI: Most Wanted should be cancelled or renewed for a third season on CBS? Don’t forget to vote, and share your thoughts, below.

not crazy about it

I just watched the episode “Criminal Justice”. I am not a racist but I am sick and tired of almost of the crime shows dwelling on race issues. This episode was overdone with the race issues and bad police. If a bad police framed a person dwell on that not the race issue. Why not discover other races that the set up. I usually have nothing but good things to say about the show. For me this episode was over the top. Even bringing race issues between the team members. I hope next season all the police shows will go… Read more »

I anxiously await the next show!!! I’m 66, and watch a lot of CBS shows, not news!!! I immensely loved this show!!! Great actors, good TV Chemistry!! That usually doesn’t happen on the 1st appearance!! Terrific Writing! I definitely want it to stay on!!! I was already hooked on FBI !! Thank you CBS!!!

I love this showing! I am ready for season 3

If could address CBS I would tell you the show’s that are great to watch, Seal Team,FBI,FBI Most Wanted, All Rise, Swat, NCIS, NCIS New Orleans that’s the Show’s that don’t need to be Canceled!!!!

FBI Most Wanted is OK. I love Crosby’s character. Other than that I just can’t get into the characters. FBI characters are even worse. They just aren’t believable to me.

I TOTALLY DISAGREE!!! I’m 66 years old and I’ve watched a lot of TV in my life and I think that these are fantastic actors in both FBI and FBI most wanted!! Keep up the good work y’all!

I absolutely love everything about FBI Most Wanted. I love the main character, Jess LaCroix, the most but also love all the others. I just learned that he, Julian Dana William McMahon, is an Australian-American actor and ex model, and the son of a former Prime Minister of Australia, Sir William McMahon! I love those Aussies!! His character is highly intelligent and very experienced and as a detective show, and not as much a cop show, he definitely thinks things through before he reacts and that’s one of the things I like best about him. And his daughter is adorable… Read more »

I wish there were more seasons and Terry O’Quinn kept showing up.

I love FBI but not a fan of FBI MOST WANTED. Too mellow and the show tries to cast the main character as MR soft hearted guy..get a tough guy in there, someone more likable.

I love his character, that’s the biggest thing I like about this show!! We needed something or someone with a fresh look, his facial expressions are off the chart/WOW!!! His forehead movements, eye contact dead on with the screen , the glasses so natural, and his mouth movements Are Fantastic!!! Natural! I can’t say enough good about this show! Love the daughter and their relationship is so real and vital to the show!!! Thanks and keep up the good work!!!

Please keep on. Very good show. Have watched since day one.

I enjoy watching FBI: MOST WANTED, it deserves a thirdcseason.

I truly enjoy watching the FBI The most Wanted. I still believe that there will be a 3 season next season.

I love this show!!!! All three episodes were great. I will watch it every week