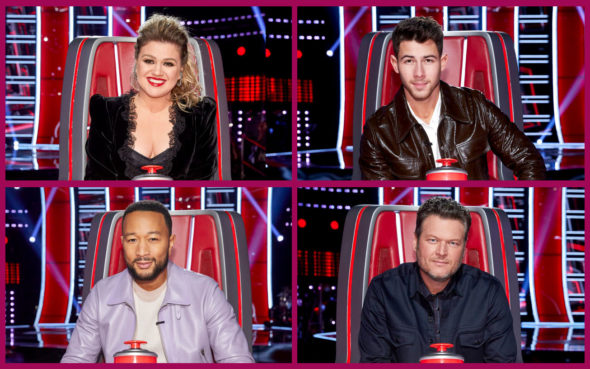 Which team will win in the 20th season of The Voice TV show on NBC? As we all know, the Nielsen ratings typically play a big role in determining whether a TV show like The Voice is cancelled or renewed for season 21. Unfortunately, most of us do not live in Nielsen households. Because many viewers feel frustrated when their viewing habits and opinions aren’t considered, we invite you to rate all of the 20th season episodes of The Voice here.  *Status Update Below.

What do you think? Which season 20 episodes of the The Voice TV series do you rate as wonderful, terrible, or somewhere between? Do you think that The Voice should be cancelled or renewed for a 21st season on NBC? Don’t forget to vote, and share your thoughts, below.

Is NBC trying to destroy The Voice, only 3 weeks of Lives?? What the heck? First Lives are to reduce teams to 3 each. Next week is semi-finals?? Really and then Finals and done?? You have taken the fun out of the show, instead by reducing by a few each week and enjoyable live performances watching artists grow, it is now wham bam thank you

Great show, I’ve watched it since it started. Blake is my favorite judge. Miss Christina A. On the show and wish they would bring her back for a season. Please don’t cancel.

Love, adore The Voice. Blake Sheldon makes the show 100%. Kelly Clarkson is truly a divine energetic, beautiful Soul. This lady has ” gumption “. John is outstanding, amazing energy. Nick Jonas is refreshing change. I miss as Christina A … big-time,wish she would come back. Great talent, very sad there is no live audience just delighted the show is on. This is my favorite music show, don’t watch any other. Plz renew for next season. The World has amazing talent we would love to hear all their ” Voices”. 5 Stars.

Absolutely love the Voice!!!! Counting on you to continue my favorite show next season And many more to come. We need positive happy fun shows and music especially during this crazy time we are living. “Music does a lot of things for a lot of people. It’s transporting, for sure. It can take you right back, years back, to the very moment certain things happened in your life. It’s uplifting, it’s encouraging, it’s strengthening.” The late, great singer Aretha Franklin. You all should feel great to be able to provide viewers the things that Aretha Franklin notes above. Additionally to… Read more »