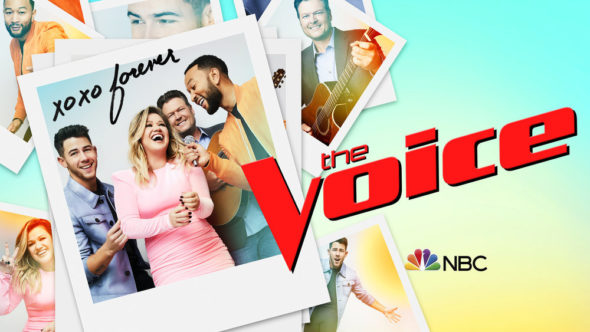 The peacock’s long-running singing competition is returning next month. NBC has announced that season 20 of The Voice, marking the series 10-year anniversary, will kick off on Monday, March 1st. It’s unclear what NBC will do to commemorate the anniversary but, given the current pandemic, it seems likely that we’ll see clips of past performances and virtual visits from past winners.

In season 20, Nick Jonas will return as a coach, alongside Kelly Clarkson, John Legend, and Blake Shelton. Carson Daly continues as host. Current coach Gwen Stefani will be sitting this one out.

The Battle Advisors this time around will include:

What do you think? Do you enjoy The Voice TV series? Are you looking forward to the 20th season of this NBC show?

I long for it to come on every season ,I mark it on my calendar and count the days .I love the talent being judged by voice and not looks .I love the bantering between Blake and his fellow judges, he cracks me up .

This show proves even if you sing like Whitney Houston but you are not a songwriter, or have a big label behind you that you will be singing at a theme park or a cruise ship. It also proves that singing is not a rare talent, but creativeness, and charisma are the secret ingredients missing. How many winners from the show are even moderately successful? Less than a handful! At least American Idol use to have a professional songwriter prepare a song for the winner to put out at the end of the season. The show is just a money… Read more »

Wow 10 years ago remember exactly when came on after Super Bowl feel in love since then. Look forward nick Jonas be couch next season.