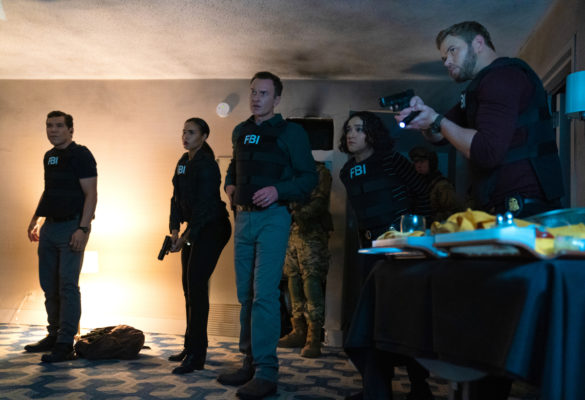 Can the team track down killer ratings? Has the FBI: Most Wanted TV show been cancelled or renewed for a second season on CBS? The television vulture is watching all the latest cancellation and renewal news, so this page is the place to track the status of FBI: Most Wanted, season two. Bookmark it, or subscribe for the latest updates. Remember, the television vulture is watching your shows. Are you?

Airing on the CBS television network, FBI: Most Wanted is a spin-off of the FBI TV series. The show stars Julian McMahon, Kellan Lutz, Roxy Sternberg, Keisha Castle-Hughes, and Nathaniel Arcand with Yaya Gosselin and Lorne Cardinal in recurring roles. The story focuses on the work of the Fugitive Task Force, a team that tracks and captures the notorious criminals on the Federal Bureau of Investigation’s Most Wanted list. The highly skilled agents function as a mobile undercover unit that’s always out in the field, pursuing those who are most desperate to elude justice. Jess LaCroix (McMahon), a seasoned but enigmatic agent, oversees the team which includes former NYPD detective Sheryll Barnes (Sternberg); data analyst Hana Gibson (Castle-Hughes); Army intel veteran Kenny Crosby, (Lutz); and deadly marksman Clinton Skye (Arcand).

Will CBS cancel or renew FBI: Most Wanted for season two? I think it’s important for CBS to establish new procedural drama series, as well as stay in business with successful executive producer Dick Wolf. I’m confident that this series will be renewed. I’ll update this page with breaking developments. Subscribe for free alerts on FBI: Most Wanted cancellation or renewal news.

5/6/20 update: FBI: Most Wanted has been renewed for a second season.

What do you think? Are you glad that the FBI: Most Wanted TV show has been renewed for a second season? How would you feel if CBS had cancelled this TV series, instead?

When will FBI Most wanted come back on CBS-TV. The replacement FBI Docudrama is not interesting.

I Love this Show Compared to the Original FBI show which I Can’t stand. They’re NO Agents walking around looking like they Needing to Cry during the WHOLE Episode. So give it a Second Season and more episodes.

This shows constant bashing of real agencies , like DHS (HSI / ICE) is shameful. The media is already spreading falsehoods around this agency. Now, we have a show called FBI: Most Wanted that has an episode about ICE supervisors kidnapping kids and planning white supremacy attacks. This show, like most law enforcement shows, is often hard to watch because it has zero grip on reality, but now …. well, now it’s just sad.

FBI most wanted is one of the best TV shows on right now. I look forward to watching it every Tuesday night.

I like FBI, but the Most Wanted show is not doing it for me. What really makes me crazy is the background music, loud and constant pounding. Sometimes I can’t hear the dialogue for the background noise.

This show has no basis in reality. I’ve canceled it off of my DVR. This last show at the end when the FBI is trying to talk the killer out of shooting himself and they let his girlfriend stay in there and try to talk him into killing himself. give me a break

I hope this show stays on! In our crazy world today, I think people need to be reminded that law enforcement does care about their safety. One “bad cop” experience and police become the enemy. I was taught that the police are my friend. I think this show portrays what really goes into some of these cases, that aren’t solved in a hour, even at the personal cost of the agents/officers. We need to protect our officers the same way they protect us, by remembering, we don’t always win.