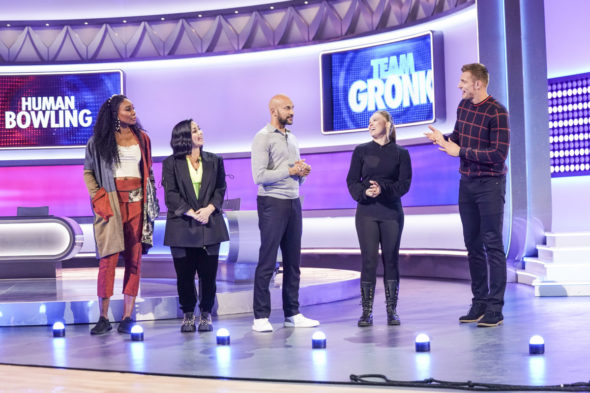 How embarressing can these challenges get? Has the Game On! TV show been cancelled or renewed for a second season on CBS? The television vulture is watching all the latest cancellation and renewal news, so this page is the place to track the status of Game On!, season two. Bookmark it, or subscribe for the latest updates. Remember, the television vulture is watching your shows. Are you?

Airing on the CBS television network, the Game On! TV series is an adaptation of the British series A League of Their Own. Hosted by Keegan-Michael Key, this series pits world champions, celebrities, and comedians against one another to see who can conquer unexpected and sometimes outrageous challenges. Two teams of three people are captained by tennis champion Venus Williams and Super Bowl champion Rob Gronkowski. Comedians Bobby Lee and Ian Karmel and a rotating roster of celebrities round out the trios. They compete in over-the-top physical challenges, absurd trivia, and extreme field competitions. At the conclusion of each episode, Team Gronk or Team Venus is crowned the winner. Meanwhile, the losing team must “take the L” in an embarrassing punishment.

The first season of Game On! averaged a 0.49 rating in the 18-49 demographic and 3.21 million viewers. Find out how Game On! stacks up against other CBS TV shows.

Will CBS cancel or renew Game On! for season two? The ratings aren’t very good but, for now, CBS needs original programming. However, I doubt that once this pandemic shutdown is over, the network will want to bring it back for a second season. I’ll update this page with breaking developments. Subscribe for free alerts on Game On! cancellation or renewal news.

What do you think? Do you hope the Game On! TV show will be renewed for a second season? How would you feel if CBS cancelled this TV series, instead?

I hope the same people will be on it

Love Game on. Hope it gets renewed

I LOVE Game On! It’s my Wednesday Night Addiction!PLEASE bring it back!

Since Covid-19 wil never be over, I hope they bring it back. Game On is original and fun. Better than watching a comedy series. You also learn something.

I think the show is hilarious! If CBS doesn’t pick this back up then Netflix needs to because this is great. Funny & Fun! What more could you ask for?

I think “Game On” is a great clean fun game show for the whole family. It’s fresh, fun and very entertaining. Please keep it or bring it back because the world NEEDS MORE LAUGHS THESE DAYS. Thank You

I would love to watch another season of this. It is the comic relief we all need right now. It’s the lowest form of humor, and I love it.

We love the show. Its just what is needed during this pandemic. My husband and I plan the night around watching it. We’re lost without it.
It was real down to earth fun. Very entertaining and funny.
Please don’t cancel it.

Game On! Is a great show!! Funny, entertaining and a breath of fresh air! Please bring it back!!! With all the stress going on in the world today, it’s a wonderful escape and it feels so good to laugh!

I enjoy and love watching the show game on it’s funny it’s something fun to watch at the end of the day and I love Venus, Bukowski, I can’t think of his name but the host and there teammates ian and lee. I really hope you guys at the tv network bring the show back on with all of the original CAST

I really hope they bring it back. Nice to have a good laugh at the end of the day – especially with everything else hoing on in the world! I agree with Lydia B about captions for the questions. Great idea !!

I really enjoy watching Game On. It is so refreshing to watch something silly and unpredictable. I think the one part that needs improvement is the trivia questions asked and answered by one team while the other is in a physical competition. It should be written in captions because it is difficult to hear the questions & answers while the crowd is cheering. I look forward to Game On each week and I would love if the show was renewed for season 2. It is funny, creative, and clever.

If there is a season 2 for Game On they need to reconsider Venus Williams. She just seems out of place and her personality is not strong enough to match the others. Other than that it’s fun to watch.