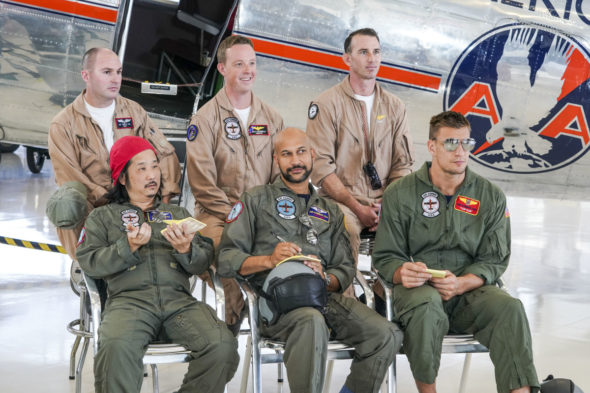 How badly do these teams want to win in the first season of the Game On! TV show on CBS? As we all know, the Nielsen ratings typically play a big role in determining whether a TV show like Game On! is cancelled or renewed for season two. Unfortunately, most of us do not live in Nielsen households. Because many viewers feel frustration when their viewing habits and opinions aren’t considered, we invite you to rate all of the first season episodes of Game On! here. *Status update below.

A CBS sports-themed game show, the Game On! TV series is an adaptation of the British series A League of Their Own. Hosted by Keegan-Michael Key, this series pits world champions, celebrities, and comedians against one another to see who can conquer unexpected and sometimes outrageous challenges. Two teams of three people are captained by tennis champion Venus Williams and Super Bowl champion Rob Gronkowski. Comedians Bobby Lee and Ian Karmel and a rotating roster of celebrities round out the trios. They compete in over-the-top physical challenges, absurd trivia, and extreme field competitions. At the conclusion of each episode, Team Gronk or Team Venus is crowned the winner. Meanwhile, the losing team must “take the L” in an embarrassing punishment.

What do you think? Which season one episodes of the Game On! TV series do you rate as wonderful, terrible, or somewhere between? Do you think that Game On! should be cancelled or renewed for a second season on CBS? Don’t forget to vote, and share your thoughts, below.

*Status Update: Game On! has been cancelled on CBS so, there won’t be a second season.

I loved the show! Thought it was great. A lot of fun and good laughs which everyone needs right now.

This is seriously painfull to watch, no one takes it serious host/teams or guest. Its like a bunch of participation awards given out for doing nothing

I love this show. I hope that it stays on!

I love this show. I hope that it stays on.

I really enjoy Game On. It’s fun to watch. The only complaint I have is that I can barely hear the questions and answers during one of the competitions because of the crowd cheering. Obviously the crowd cheering is part of the fun so maybe the questions should be written in captions in addition to asking verbally. It’s silly and clever and I look forward to watching every episode.

another stupid “game / competition” show , filled with useless filler, if you want to be a game show play the game, i dont need to see field goal kicking, and other useless junk, actually dont need another game show, ESPECIALLY with rich “celebrities” getting what im sure is ridiculous amounts of more money to be on it

Awful. I would rather watch repeats of a bad show than this tripe.

They took off “Tommy” for This “Ridiculousness” reject.