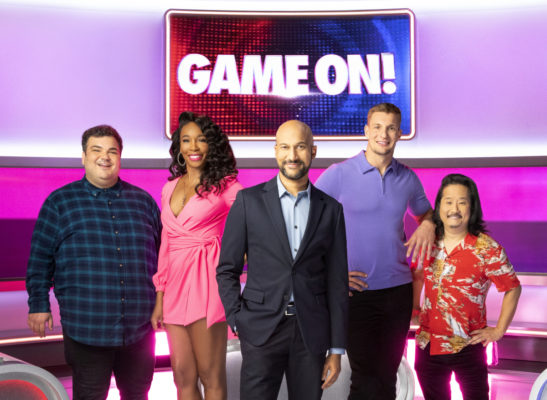 TV show description:
A sports-themed game show, the Game On! TV series is an adaptation of the British series A League of Their Own. James Corden hosted the UK series and serves as one of this show’s executive producers.

Hosted by Keegan-Michael Key, this series pits world champions, celebrities, and comedians against one another to see who can conquer unexpected and sometimes outrageous challenges.

Two teams of three people are captained by tennis champion Venus Williams and Super Bowl champion Rob Gronkowski. Comedians Bobby Lee and Ian Karmel and a rotating roster of celebrities round out the trios. They compete in over-the-top physical challenges, absurd trivia, and extreme field competitions.

At the conclusion of each episode, Team Gronk or Team Venus is crowned the winner. Meanwhile, the losing team must “take the L” in an embarrassing punishment.

What do you think? Do you like the Game On! TV show? Do you think it should have been cancelled or renewed for a second season?

I love the show and hope to see it for another season. I work nights and DVR each show to watch when I get home. Perfect host. Perfect Celebs and I think Venus and Gronkowski are the best!

Love this show. Hope it doesn’t get canceled

It is a great show. Please don’t cancel!!

Need to come back, nice to have a fun show that makes you laugh. Not all the disgusting smut stuff.

My husband and I just love the show, I hope it will be continued!

I love that show. It is entertaining and should not be canceled. It has not been on for a week now and really miss it.
Does anyone know when it is due to come back on?

We love Heartland (even though Tim drives us crazy).. We started watching because there wasn’t too much clean, wholesome TV to watch.. We decided to try it and are now on season 8.. Thanks for continuing the series!

I love Heartland. I have finally found it again after many years and only on season 10. I really want to see all seasons before CBS airs the 14th season. Sometime I watch so many showings I can smell horse manure. Love it love it.

Finale date TBD? Really? I would think tonight’s was already it!