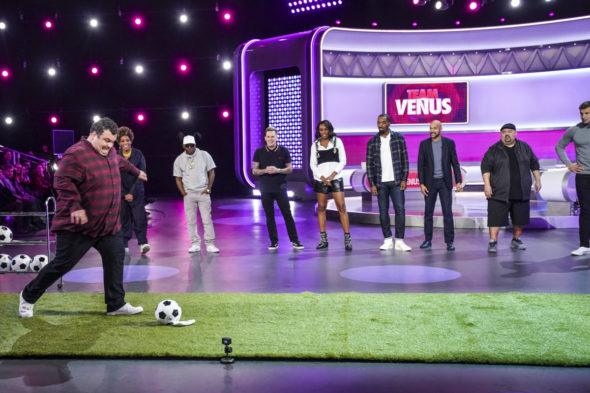 Games shows can be hit or miss in primetime television. Some do really well in the ratings while most are a disappointment. How will the new Game On! series perform for CBS? Will the show be cancelled or renewed for season two? Stay tuned.

A sports-themed game show, the Game On! TV series is an adaptation of the British series A League of Their Own. Hosted by Keegan-Michael Key, this series pits world champions, celebrities, and comedians against one another to see who can conquer unexpected and sometimes outrageous challenges. Two teams of three people are captained by tennis champion Venus Williams and Super Bowl champion Rob Gronkowski. Comedians Bobby Lee and Ian Karmel and a rotating roster of celebrities round out the trios. They compete in over-the-top physical challenges, absurd trivia, and extreme field competitions. At the conclusion of each episode, Team Gronk or Team Venus is crowned the winner. Meanwhile, the losing team must “take the L” in an embarrassing punishment.

7/23 update: You can see the latest night’s ratings in context.

What do you think? Do you like the Game On! TV series on CBS? Should it be cancelled or renewed for a second season?

I enjoy the show,each week I looked forward to see the different challenges. I hope it gets renew.

Look forward to Game On each week. It is fun and entertaining. Disappointed it was missing 7/29/20. Please renew.

My grandson and I don’t miss a show .
We look forward to it . I record it so we can watch together. It is a lot of fun and something that can be enjoyed by the whole family!

I think it’s a fun entertaining show. Please bring it back for second season.

Switched to NBC for that hour.

I had a smile on my face watching Game On for the entire hour. It’s so refreshing to see a silly but very fun show. I love Game On and I think it has alot of potential to be even bigger and better with different celebrities every week and challenging competitions.

Game on? Cancel that garbage quick!