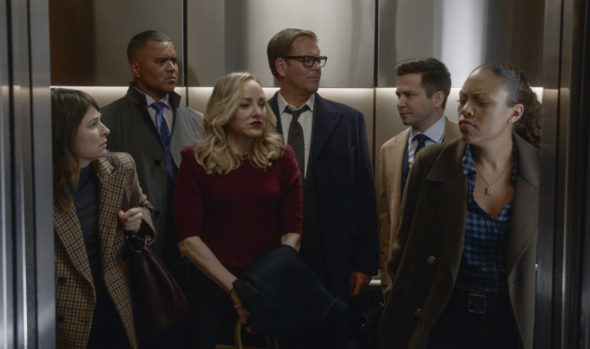 Can Jason Bull find balance in the fifth season of the Bull TV show on CBS? As we all know, the Nielsen ratings typically play a big role in determining whether a TV show like Bull is cancelled or renewed for season six. Unfortunately, most of us do not live in Nielsen households. Because many viewers feel frustration when their viewing habits and opinions aren’t considered, we invite you to rate all of the fifth season episodes of Bull here.  *Status Update Below.

What do you think? Which season five episodes of the Bull TV series do you rate as wonderful, terrible, or somewhere between? Do you think that Bull should be cancelled or renewed for a sixth season on CBS? Don’t forget to vote, and share your thoughts, below.

I love this show! Michael Weatherly is awesome. I have been binge watching on paramount+ but some episodes are missing. I love feel good tv that is exciting and personal and takes you along for the ride. Bull does just that!

I had stopped watching CBS all together…Until I accidentally found Bull…. I LOVE IT! ITS THE BEST SHOW ON TV. I have it set on my tablet and my TV to make sure I don’t miss it. I got sick of the crap on ABC NBC turned the channel and I have been a fan since….Great job CBS…you cancel and I’m going back to ABC NBC…

There is so much futuristic crap on t.v these days. I absolutely LOVE Bull..fantastic show, fantastic cast. Please keep this show for those of us that just want to watch a good show.

A friend in need was a great season finale, would love to see them get married

Please renew the Bull series, we look forward to watching this, unlike other programs. We would prefer a 9 o’clock time rather than 10 pm, but please don’t cancel, this is a great program.

I really enjoy Bull episodes. I wish the time had not changed to 10 pm from 9pm. I can’t stay up that late because of work in am. So I can not watch it very often. Change the time back and watch viewing increase.

My husband and I really enjoy watching this unique show . It’s one of the best on tv . Please renew . Thanks much