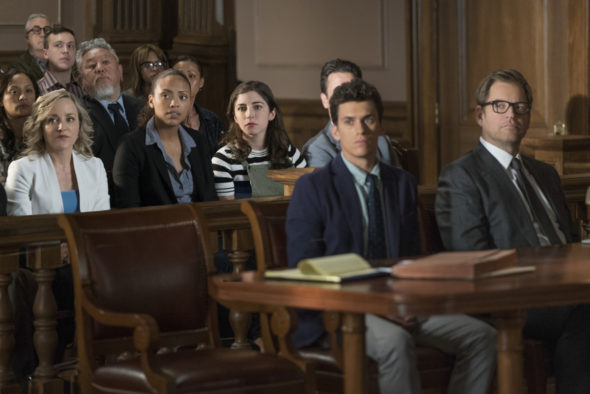 How well does Jason Bull’s Trial Analysis Corporation size things up in the second season of the Bull TV show on ABC? As we all know, the Nielsen ratings typically play a big role in determining whether a TV show like Bull is cancelled or renewed for season three. Unfortunately, most of us do not live in Nielsen households. Because many viewers feel frustrated that their viewing habits and opinions aren’t considered, we’d like to offer you the chance to rate all the season two episodes of Bull for us here.

What do you think? Which season two episodes of the Bull TV series do you rate as wonderful, terrible, or somewhere between? Should CBS cancel or renew Bull for a third season? Don’t forget to vote, and share your thoughts, below.

Please continue Bull we look forward to watching him weekly. I have decided that if Bull is cancelled I will make sure to never watch another show from the same executive producers.

I am so looking forward for season 3 Bull is a great show and up there as one of my favorites!! Michael Weatherly is a fantastic actor and brings the show to life along with his cast, so please renew it …

Please let’s have a season 3!

Please bring back bull for another season 3 great show!!

Am always delighted with this show! I want more!

Glad to see that they have added some variance in the forgone conclusion that their side would always win and would always be right. Good show. Keep it on.

Great show ! I t is both interesting an fun to watch. Would be very disappointed if it were cancelled. Has an unending possibility with plot and story lines. never know what is next.

One of the best thought out and planned shows on television, if the star Mr Weatherly is ill would be The ONLY reason to halt it, NOT cancel. I LOVE it and look forward to it…..great team and we feel the love between them

I really enjoy this show and its one of the first shows to watch for the week. Even though you moved it from Monday!! I wasnt sure how you would pull it off but you have interested storylines and court cases. Now lets bring some life to Bull but since he is hitting bottom, he has no where to go but up, up, up!

Bull is a great show. My spouse and I miss Michael Weatherly on NCIS. He makes any show he appears in better.

I love this show. Never miss it