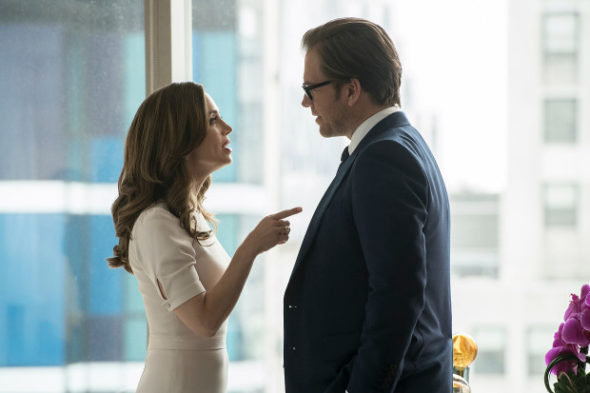 According to reports, Dushku filed a formal complaint against Weatherly after what she alleged were several incidents sexual harassment on set. Initially, here character was slated to become a series regular and romantic interest for Weatherly’s character on Bull.

However, this story is not what fans were told after Dushku initially left the series. In 2017, showrunner Glenn Gordon Caron told TVLine she was written out for plot reasons:

I think what we all realized was… the only way to have kept her character in the show, because she is a lawyer, was if her law firm bought Bull’s company, and then you’re really changing the DNA of the whole show. There was no way to keep that sort of ‘duet’ working.”

What do you think? Do you watch Bull? Do you think Dushku should’ve stayed on the show?

Since we aren’t privy to what exchanges occurred between Ms. Dushku and Mr Weatherly, it is hard to judge what happened. I love the the Bull shows and will keep on watching. I have experienced being on a real jury 4 times and was selected as jury foreman three of those times. The scenes are very realistic. JR from Arkansas.

I sure hope Bull is renewed. The storylines are always interesting with unexpected twists. The actors fit well together so it’s very realistic; great acting. I particularly like Bull and Marissa. And Cable’s replacement was able to fit right in to the story which is often hard to do. PLEASE renew!

No, never did care for this actor, only because she couldn’t act. I thought she was awful. Just because she is beautiful is no reason to keep her.

When are women going to stand by other women? Sexual harassment is a common and men supporting and covering up for men is common as well. As a woman I am disgusted by the comments by other females in this forum. Whether you liked her character or not isn’t the point. I liked the show but I believe this woman and choose to watch something… anything else rather than support this show or it’s advertisers. I hope the show replaces their star or gets cancelled and Mr. Weatherly is out of a job.

No, i never liked her at all.

No, definitely a character I would not
want to pursue, especially after allegations of that nature. This would’ve been totally uncomfortable for both characters.

I watch Bull every week and I don’t remember her character. No big loss.

I don’t believe most of these women with their accusations. All a man has to do these days is FLIRT and it’s considered sexual harassment. I’m a woman and I worked my whole life in the entertainment business and believe me these women make these accusations and are immediately believed . I was, more than once, a witness to these so-called harassments and more than one was a simple touch on the shoulder or on the arm that meant absolutely nothing. These women are paid off to avoid law suits and the cost and publicity connected to them. Don’t automatically… Read more »

I’m a fan of the show and the show’s star. I’m also a fan of Eliza Dushku. What ever happened is between them. I’m not going to draw a conclusion either way. She’s 9.5 million happier. I’m not going to stop watching the show over this. It’s one of the few shows I watch on CBS.

I am very disappointed in Michael Weatherby’s conduct. I was a faithful viewer of “Bull” but no more.

Will this show be cancelled after season 2 is finished? We will find out.

I think women are losing their sense of humor and the networks aren’t fighting it but paying them big settlements. Why would any man harass women in this environment. I worked 40 years with men and women and no one ever felt sexually harassed. Punishing men for behavior thathappened years ago is blackmail. If you can’t speak up at the time, then get over it

I agree this metoo movement(which was purposely made or taken from whomever started it) has gone too far. I don’t know about this case but to say “I worked years blah no ever felt harassed” just seems implausible to make some point. Women and men are harassed taken by human trafficking but I’ve never met anyone who has been through that, but I know it happens. I would never say that didn’t happen and some people are threated and fear for their life and that keeps them from SPEAKING UP!

One has nothing to do with the other…..

She DID speak up at the time. Also, no man should be treating their co-workers like that.

I never cared for her character.

Neither did I so no loss.

I never like her acting, she probably said something to trigger Michael to make inappropriate comment, maybe she provoke him. I was not there and it is unfair to Michael to be treated this way. He has been with NCIS for 13 seasons and you do not get any bad comments about his behavior.