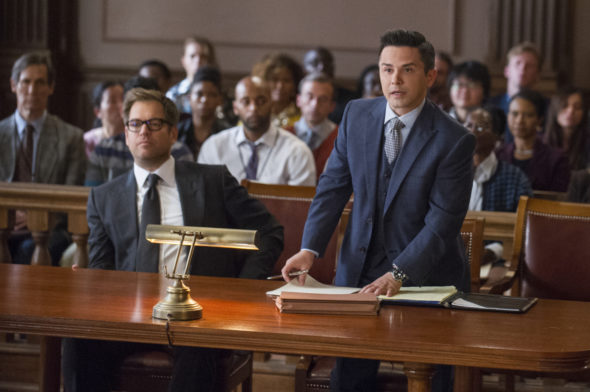 Does Jason Bull have it all figured out? Has the Bull TV show been cancelled or renewed for a third season on CBS? The television vulture is watching all the latest cancellation and renewal news, so this is the place to track the status of Bull, season three. Bookmark it, or subscribe for the latest updates. Remember, the television vulture is watching your shows. Are you?

The second season of Bull averaged a 1.19 rating in the 18-49 demographic and 10.62 million viewers. Compared to season one, it’s down by 17% and down by 8%, respectively. Find out how Bull stacks up against the other CBS TV shows.

Although it premiered with much lower numbers than season one, the second season’s been doing reasonably well for CBS. I’m sure Bull will be renewed for a third season. I’ll keep an eye on the Nielsens and will update this page as needed. Subscribe for free updates on any Bull cancellation or renewal news.


What do you think? Are you glad that CBS has renewed its Bull TV series for a third season? How long do you think this TV show should run?

I hope Bull will continue. Although a man with a huge ego, Bull is a likeable character and the show is interesting to watch. Different from all those other crime dramas.

I hope you don’t cancel Bull It is a good show with a different approach.

Please renew NCiS, NCIS Los Angeles. Bull, MacGyver, Salvation and others I cannot think of. You salvage the good shows for all junk shows and we are getting tired of it and others are already tired of it. We will go with another if our shows do not return.

I love this show a lot! I hope it is renewed for next season.

Love this show! Hoping that it will return next season!!

Love Bull please bring it back