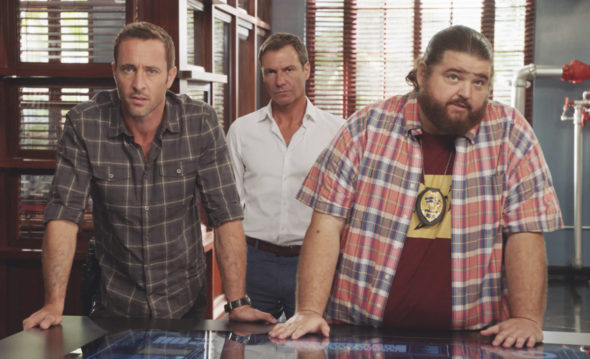 How much longer will McGarrett and his task force protect the Aloha State? Is the Hawaii Five-0 TV show cancelled or renewed for a ninth season on CBS? The television vulture is watching all the latest TV cancellation and renewal news, so this page is the place to track the status of Hawaii Five-0, season nine. Bookmark it, or subscribe for the latest updates. Remember, the television vulture is watching your shows. Are you?

The eighth season of Hawaii Five-0 averaged a 0.95 rating in the 18-49 demographic and 8.29 million viewers. Compared to season seven, that’s down by 16% in the demo and down by 5% in viewership. Find out how Hawaii Five-0 stacks up against the other CBS TV shows.

The ratings have remained pretty steady (an impressive feat these days) so I suspect that CBS will want to renew Hawaii Five-0 for a ninth season. However, Alex O’Loughlin has indicated season eight may be his last, so that could easily spell the end for this reboot. I expect that he will agree to return and the show will be renewed. I’ll keep an eye on the Nielsens and will update this page with breaking developments. Subscribe for free updates on any Hawaii Five-0 cancellation or renewal news.

What do you think? Are you glad that the Hawaii Five-0 TV show has been renewed for a ninth season? How would you feel if CBS had cancelled this TV show, instead?

I love Hawaiian five-0 it’s such an amazing show I’ve watched them all and have started over beacuse I like it so much I can’t wait until season 9 comes out and on Netflix but they should keep making these with the same characters from the beginning with Max Danny chin Steve Cathy and chins cousin it’s hard to say her name she’s awesome and the shrimp guy and the guy with long hair off of lost the big heavy set guy with long hair, keep up the good work I love this show keep making them and I will… Read more »

Love Hawaii Five 0. Watch it over and over on Netflix can’t wait till the 9th season comes out

We love Hawaii five o. It is a great show

I never thought I’d be hooked on Hawaii Five-O but I am and I love it. I cannot wait for season nine to begin… followed by season 10:)

I can’t wait for season 9 to come on Netflix I absolutely love this show and hope and pray there are many many more seasons to come…..

I’d like to see the present day Hawaii Five O air for at least 12 seasons, the longevity of the original Hawaii Five O, 1968-1980.

I am so happy that three is going to be a season nine of Hawaii Five-0. I actually don’t know what I would do if Hawaii Five-0 would have been cancaled. It is my favorite show in the entire world. Thank God that there is s ninth season coming out…

I love Hawaii 5 o. Please don’t take it away. I have it on my tablet to so when I’m gone from home I can watch it. I’ve got the DVD series too that’s how much I love it

This has got to be one of the most endearing programs… I am bummed beyond to wait for 9… I absolutely love the inside personal stories of each… main characters r fabulous… nothing would work without Steve… he’s incredible.u r drawn in to him in such a big way … his HEART is not to be denied.. A HUGE HUGE FACTOR in his person..Danny and the “bickering”…. so often annoying and yet PERFECT and as I said endearing. Catherine simply MUST come back and be “part of Steve”… that’s a given. The new cast is quite good… always tough to… Read more »

I agree with you. I love the show and i want Kono and Adam back as well