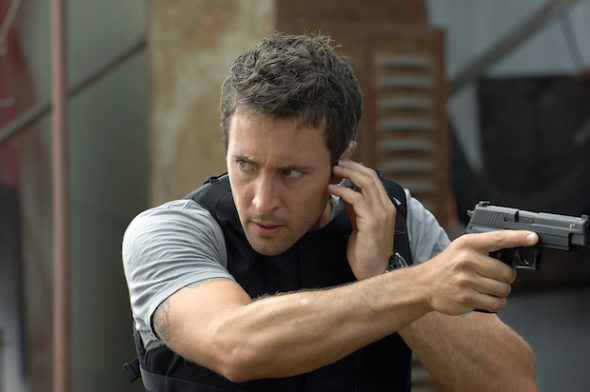 Is Alex O’Loughlin leaving Hawaii Five-0 or not? Recently, the star of the CBS TV show spoke with TVLine about his plans for a possible season nine.

Last year, O’Loughlin said he was leaving Hawaii Five-0 after season eight. However, now it looks like his mind has changed. In a recent interview with TVLine, O’Loughlin said season nine is a possibility:

I don’t know that I’d say I got a ‘second wind’… But is there a way that I can realistically see a Season 9 being a part of my life? I think so.”

To be honest with you, mate, if you had asked me [about re-signing] two years ago, my answer would have been, like, ‘No f’–king way.’ I want a quality of life, and I want to be with my family. I’ve been able to put Humpty together again.

I am still very tired at the end of the season, and after almost 200 episodes of television. But I can sort of quietly and sensibly sit back and go, ‘There’s a version where if CBS can make a deal and be reasonable, then I’m prepared to be reasonable, too.’”

CBS has not yet announced a season nine renewal for Hawaii Five-0, but it seems likely given the series’ solid ratings.

What do you think? Do you watch Hawaii Five-0? Do you want another season?

I never missed a show of Hawaii 5-O and now i’m watching all the reruns. Absolutely love the show.

Yes bring Hawaii 5 0 back with Alex and Danny. Love the show and these actors

I think it should stay on I love this show

Yes I love Hawaii 5-0. I look forward to it each week and I have missed it. PLEASE CONTINUE!!

Danny’s character is very annoying to me. It is the only part of the show that I have never liked. He is always whining about something with Steve. I should think the writers could come up with something more interesting.

Yes, Please have a couple more seasons Steve has to come back along with Danny and the rest of the crew.PLEASE, PLEASE DO NOT CANCEL THIS SHOE . AND STEVE YOU ARE THE ONLY ONE WHO CAN PLAY YOU. OK thanks