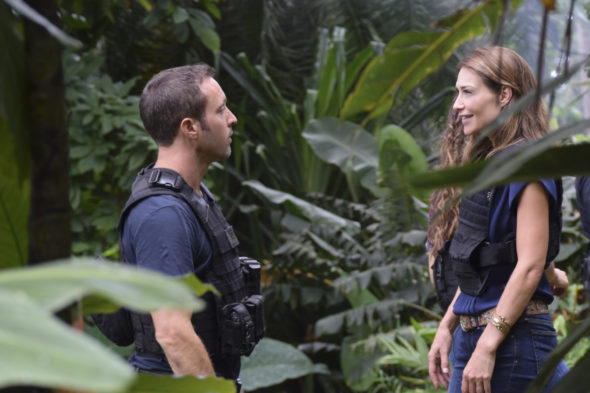 On Twitter, Lenkov confirmed there will be 25 episodes for season eight of Hawaii Five-0, one more than originally announced last fall by CBS.

What do you think? Do you watch Hawaii Five-0? Are you enjoying season eight so far?

I love this show. Hope it will be renewed one more season
Love the story lines and the humor.

I love Hawaii Five 0. I look forward to the new Seasons each year. Thank you for adding one more episode than scheduled. I do miss Daniel Dae Kim and Grace. I am very happy for Jorge’s weight loss. I just love his character and of course Steve and Danny and his cousin. Please do keep this show on the air. I love all the storylines, with the humor as well as the law enforcement aspect of the show. Thank you.
Carole Walker-Hodgson

KEEP IN JOY THE SHOW.I WATCHED STEVIE FROM MOONLIGHT

Additional episode orders could also lead to story wrap-ups and be the end of the series. But, hopefully, this isn’t the case.

I love Hawaii Five O, I can not miss one show.
I hope it comes back for season nine with Alex O’Loughlin and Scott Caan.

I really miss Chin. They should’ve paid him the extra money.