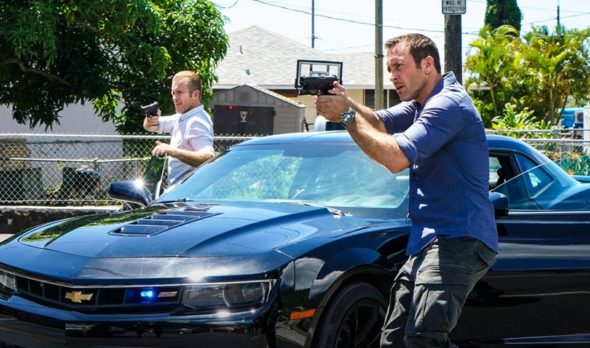 Is paradise a safer place in the 10th season of the Hawaii Five-0 TV show on CBS? As we all know, the Nielsen ratings typically play a big role in determining whether a TV show like Hawaii Five-0 is cancelled or renewed for season 11. Unfortunately, most of us do not live in Nielsen households. Because many viewers feel frustration when their viewing habits and opinions aren’t considered, we invite you to rate all of the 10th season episodes of Hawaii Five-0 here. *Status update below.

What do you think? Which season 10 episodes of the Hawaii Five-0 TV series do you rate as wonderful, terrible, or somewhere between? Do you think that Hawaii Five-0 on CBS should be cancelled or renewed for an 11th season? Don’t forget to vote, and share your thoughts, below.

Please Cbs We fans of hawaii Five 0 are waiting a good News about the back of our favorite ohana.

The executives CBS desapointed the fans because to cancelad the best show Hawaii five0.
Didn’ respect the fans opinions

Please CBS bring back Hawaii five0.
Is the best show of CBS and we don’t understand how to finished.
Hawaii five0 and Alex O’loughlin are loved by fans.

Hawaii five O like NCIS los are part of the good and great with strike back series.
Someone is nuts to cancel either

Hawaii five0 is loved by fans and the best police serie of TV.
We fans love Alex O’loughlin.

Please CBS bring back hawaii Five 0 for us.
Is the best show.
Alex O’loughlin is loved by fans .