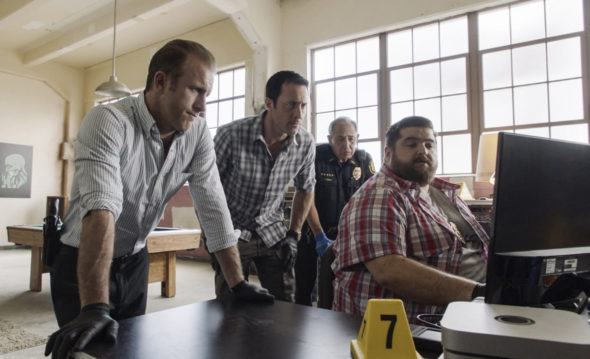 McGarrett and his team are going to continue protecting the islands. CBS has renewed the Hawaii Five-0 TV show for a 10th season. It will air as part of the 2019-20 television season (which kicks off in the fall).

Hawaii Five-0 stars Alex O’Loughlin, Scott Caan, Meaghan Rath, Jorge Garcia, Taylor Wily, Dennis Chun, Kimee Balmilero, Chi McBride, Beulah Koale, and Ian Anthony Dale. Based on the 1970s series of the same name, this TV show follows the work of an elite federalized task force whose mission is to wipe out the crime that washes up on the islands’ sun-drenched beaches. The team is led by Detective Steve McGarrett (O’Loughlin), a decorated Naval officer turned cop. He returned to Oahu after Hawaii’s former governor persuaded him to head up the new team, They operate under his rules with no red tape and full blanket authority to hunt down the biggest “game” in town.

Airing on Friday nights, the ninth season of Hawaii Five-0 is averaging a 0.79 rating in the 18-49 demographic and 7.32 million viewers. Compared to season eight, that’s down by 17% and 12%, respectively.

What do you think? Do you enjoy the Hawaii Five-0 TV show? Will you be watching season 10 of this CBS drama series?

Love this show and the new people they keep adding make it the one of a few good shows to watch on a Friday. Please don’t cancel the show and keep Friday evening a decent night of tv

Great show! If A person has ever been to the islands and seeing how beautiful they are the shots and scenery on Hawaii Five-0 make it a great show to watch!